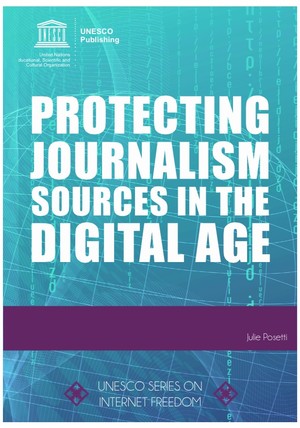 The legal frameworks that protect the confidential sources of journalism – essential to reporting information in the public interest that may otherwise never come to light – are under significant strain around the world in the digital era. There’s now a need to revise and strengthen them – or introduce them where they don’t exist, according to the forthcoming UNESCO-commissioned study: Protecting Sources of Journalism in the Digital Age.

The study also found that source protection frameworks are challenged by questions about entitlement to claim protection, such as: “Who is a journalist?” and “What is journalism?” — which are matters that increasingly require case-specific assessments.

What happens when source protection is compromised?

Where source protection is compromised, the impacts can include:

If confidential sources are to confidently make contact with journalists, the study proposes four conditions:

The study concludes that editors and publishers can play an important role in  promoting public understanding of these issues, and in advocating for change  at all levels.

A major output of the study is an 11-point assessment tool for measuring the effectiveness of legal source protection frameworks in the digital era.

It was concluded that a model framework should:

1. Recognise the value to the public interest of source protection, with its legal foundation in the right to freedom of expression (including press freedom), and to privacy. These protections should also be embedded within a country’s constitution and/or national law,

2. Recognise that source protection should extend to all acts of journalism and across all platforms, services and mediums (of data storage and publication), and that it includes digital data and meta-data,

3. Recognise that source protection does not entail registration or licensing of practitioners of journalism,

4. Recognise the potential detrimental impact on public interest journalism, and on society, of source-related information being caught up in bulk data recording, tracking, storage and collection,

5. Affirm that State and corporate actors (including third  party intermediaries), who capture journalistic digital data must treat it confidentially (acknowledging also the desirability of the storage and use of such data being consistent with the general right to privacy),

7. Define exceptions to all the above very narrowly, so as to preserve the principle of source protection as the effective norm and standard,

8. Define exceptions as needing to conform to a provision of “necessity” and “proportionality” — in other words, when no alternative to disclosure is possible, when there is greater public interest in disclosure than in protection, and when the terms and extent of disclosure still preserve confidentiality as much as possible,

9. Define a transparent and independent judicial process with appeal potential for authorised exceptions, and ensure that law-enforcement agents and judicial actors are educated about the principles involved,

11. Recognise that source protection laws can be strengthened by complementary whistleblower legislation.

The study responds in part to acknowledgement in both the UN General Assembly and the UN Human Rights Council of “the particular vulnerability of journalists to becoming targets of unlawful or arbitrary surveillance or interception of communications in violation of their rights to privacy and to freedom of expression.” It also contributed to a global UNESCO study of Internet-related issues.

Protecting Journalism Sources in the Digital Age is expected to be published by UNESCO midyear (see attached flyer).

Disclaimer: While the research was conducted for UNESCO and funded by Sweden, with the support of the University of Wollongong (Australia), the ideas, opinions and findings are those of its author, Julie Posetti, they do not necessarily reflect those of UNESCO or Sweden and do not commit these parties.