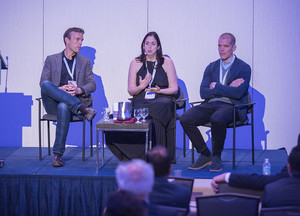 In the photo, from left: Remco Steen, head of programmatic trading at Telegraaf Media Group; Alanna Gombert, CEO of Gombert Consulting; and Robert Johansson, head of RTB and programmatic for Schibsted.

Alanna Gombert, CEO of Gombert Consulting, gave a simple definition of the term, explaining that programmatic is an automated way to book advertising inventory. In other words, programmatic advertising works when publishers put inventory up for sale so buyers may bid on it, usually in real time. Gombert noted that there are currently three major marketplaces for publisher inventory in the USA: Google Ad Exchange , Rubicon and PubMatic. In Europe, there are Adform and Omnicom.

Sales teams need to understand the auction mechanics behind programmatic advertising and it is imperative that they understand what is going into the market, Gombert said.

Another aspect to understanding programmatic advertising is training, as Robert Johansson, head of real-time-bidding (RTB) and programmatic for Schibsted, has implemented at the Swedish-based company.

The company has trained their sales team through workshops, how-to guides and hands-on learning.

“We’ve had a lot of training because people have been afraid of programmatic, and if you’re afraid of something, you don’t want to work with it,” said Johansson.

Johansson gave some insight into the procedures his company has implemented to ensure programmatic buying is a smooth process for his team and clients. He noted that they thrive because of their data-driven approach and because they make it a priority to maintain strong client relationships.

How the European business model works

Schibsted is at the forefront of Sweden’s market mainly because the company runs a private marketplace – buyers can purchase advertising inventory only if they have been invited. They do this to build strong client relationships and maintain better control of their sales.

“Eighty to ninety percent of our revenue is coming from the sites, because that’s where people want to buy, and that’s the big difference between the Swedish and American market,” said Johansson. “We have a lot of focus on branding.”

This has also allowed them to develop self-service solutions for smaller advertisers, allowing them to buy inventory directly, in real time.

The future of programmatic advertising

Steen says the Telegraaf Media Group’s future is about being more efficient, since their vision is to automate everything and streamline and simplify the buying process for clients.

In addition, he said, they have an optimistic outlook about their future.

“About 70 percent of our inventory can now be bought by programmatic. Next year it will be 90 percent,” said Steen.

Furthermore, he noted that the company currently uses up to six technology platforms to run their programmatic business, which often has negative implications.

“It’s very expensive, and most of these big players expect a revenue share. Basically, if you’re doing well, you’re getting punished by your own success,” said Steem. “The way we’re thinking, going forward, is to build our own technology.”

All three executives predicted that programmatic advertising budgets will increase in the USA and Europe, and real time bidding will become even more popular in those markets.

In addition, they assert that it is in publishers’ best interest to use programmatic advertising because it will continue to grow this year and dramatically change the way advertising functions.

[Editor’s note: WAN-IFRA has published a report, “The impact of programmatic advertising on news publishers.” More information is available here.]