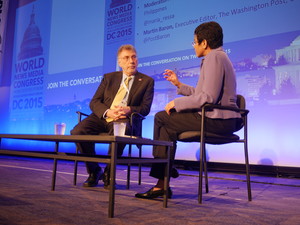 “We have to recognise that the vast majority of people are getting their news digitally – and most of them access it through mobile. The big challenge is that we still have a newspaper and that print product represents the biggest portion of our revenue.”

On the rising credibility of new competitors like Buzzfeed

How do you ensure your journalists set the agenda and not just follow the metrics?

Baron acknowledges that he’s tracking the performance of today’s Washington Post stories and checked how they were faring before coming on stage. But it’s also important for journalists to recognise that: “We’re not just followers, we have to be leaders”

“Don’t be a slave to the metrics”, he says, pointing to the importance of agenda-setting stories like The Washington Post‘s Pullitzer winning coverage of the NSA leaks.

Could Woodward and Bernstein break Watergate today given resourcing issues?

“Absolutely! If we encountered a story like Watergate today, we would throw all of our resources at it” says Marty Baron, pointing to recent Post investigations into police shootings as evidence.

It’s important for reporters to be responsible for developing an audience for their own stories, @PostBaron says. #wnc15

On the question: “Why would anyone study journalism today?”

Baron “It’s a mistake to think that this is not a good time to get into journalists. In many cases, young journalists can leap frog older journalists. For young journalists with the important basic skills and intellectual curiosity, people with a better understanding of how to communicate on the web, there are still jobs. We’re hiring those people.”

“The biggest challenge is that we are just being asked to do so much. We’re doing audio, we’re doing video, we’re having to do such a wide range of things and resources are fewer. We’re asked to do more – constantly more. It’s a huge challenge.”

“We do really need editors. They’re our quality control. It’s a huge mistake to think we don’t need editors. People remember our mistakes a lot longer than our successes.”

After his on-stage interview, Baron spoke to Julie Posetti about the impact of the constant push for newsrooms to increase output while resources shrink.