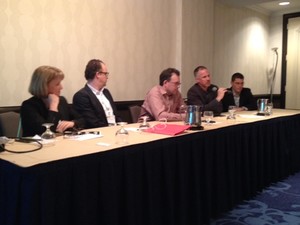 In an upbeat session, Billy Penn founder Jim Brady, Chris Edwards of Gazette Media and J. Tom Shaw of Shaw Media, focused on making the most of your strengths, rooting out your weaknesses and taking advantage of the benefits that being a local media company offers.

“Stop listening to people who tell you what local can’t do and focus on what you can – like the fact your audience is physically close to you,” noted Brady.

It was this closeness to its audience that led mobile news site Billy Penn to start holding regular events, for example inviting all the people who “like” a story on education to take part in an event where you invite members of the local board of education as speakers.

The three participants in the panel all work for media companies with a local focus.

The Gazette is a 132-year-old business that just moved to a new business model, fully owned by its staff, and is primarily based on a 50,000-circulation daily newspaper and an ABC affiliate TV station; Billy Penn only launched in October 2014 as a mobile-first platform covering Philadelphia, the fifth largest media market in the US; while Shaw Media is a 164-year-old family owned media business that operates nearly 100 print and digital publications in Illinois and Iowa.

But rather than integrate commercial and newsroom teams, they have effectively split the company into two, putting all of their internal and external ad services under one business, called fusionfarm, with Edwards as the lead.

The media operation can then “focus on reinventing journalism,” Edwards said. “We are now looking to find companies to acquire.”

While The Gazette and Billy Penn each allow users free access to their content, J. Tom Shaw said his company switched last year from full access to a metered model at each of Shaw’s paid-for dailies.

“I completely agree with everyone here who has said that advertising revenue is not going to be enough to support us in the future,” Shaw said, and this is why the company is looking to increase revenues through areas such as digital subscriptions.

Much like fusionfarm, in addition to its broad array of publications, Shaw Media also offers digital services to other companies for such as:

Also speaking was Markus Feldenkirchen, CEO of ppi Media US, which co-sponsored the session along with the Local Media Association. Germany-based ppi is a provider of automated software solutions to newspapers around the world. Like their publisher customers, they are keen to innovate and stay fresh.

Besides new mobile products and a regular hackathon, Feldenkirchen mentioned their intriguing “one year coffee for free”, opening up their office space in Kiel in order to see how small start-ups work.

Click here for our recent interview with Nancy Lane.

Click here for our recent interview with Jim Brady.