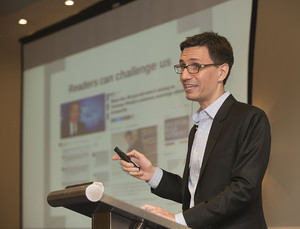 In separate presentations, they made suggestions for best practices in doing this.

Journalists in today’s digital world want to know how “well” their story performed. James Robinson, director of analytics innovation at The New York Times, often fields this question from newsroom staff. When asking about how “well” something did or about its “engagement,” Robinson said people often focus too much on quantitative measurements, such as assuming that more page views mean a better performance. This neglects more qualitative insight and understanding when evaluating success.

Trying to measure engagement by looking for a number “is like trying to measure how much I love my wife by how many flowers I buy her every week,” he said. Numbers alone cannot describe the value of factors such as emotion.

One way to fight against the “tug” of going for scale is to recognise that gone are the days of one audience consuming one product. Instead, news publishers have a multitude of audience segments consuming a multitude of products.

Having multiple audiences can be an advantage to news organisations. But to understand any one audience, one must first define it, Robinson said. The audience for a story is not simply the readership of the news organisation; it might start with who is interested in a specific topic. To better identify which audiences a news organisation has, Robinson emphasised using metadata to tag story topics. Tagging content also can help with audience segmentation — it enables newsrooms to better determine how many readers have read multiple pieces on a given topic in a specified time period.

Next, media organisations must listen to the audience by marrying qualitative research with quantitative analytics. For example, the Times treats Reddit as a way to connect newsroom staff to the audience. A bot scans the platform for threads discussing Times content and sends notifications to a Slack channel and an email list. That way, interested reporters and editors trained on Reddit norms can see what’s being said and jump into conversations as they’re happening.

Finally, publishers must adapt to the audience — but not in a way that degrades values, Robinson said. For example, the Times began its “Paying Till It Hurts” series, about the cost of U.S. health care, with one article. It then provided many opportunities for further conversation on social media, such as on Facebook. All of the follow-up coverage in the series started from comments.

Greg Barber, (pictured) director of digital news products at The Washington Post, gave several examples of how a news organisation’s audience has improved its journalism.

Readers have been starting conversations for decades, ever since the beginning of the letters to the editor section. More recently:

They’ve helped tell stories. NPR asked its readers which lobbyists were in the room during the early health care debates, which helped the news company identify who influenced conversations and, potentially, policy. WNYC asked its readers to track cicadas on the East Coast, including the submissions on a map.

They’ve funded journalism. Readers not only receive the news, but also give support through Kickstarter campaigns and other solicitations.

But Barber emphasised that audiences can only help if journalists listen to them. He posited that news organisations should think strategically about how to interact with readers, encourage the sharing of stories and build communities.

Barber’s working on The Coral Project — a collaborative effort among The Washington Post, The New York Times and Mozilla — to create open-source software for an online community that highlights and incentivises thoughtful contributions to a healthy debate. He hopes the software will, among other things, enable publishers to better understand their audience and identify trusted users who could contribute to their coverage.

Claire Wardle, research director at the Tow Center for Digital Journalism, doesn’t love the term “user-generated content.” The word “user” doesn’t make journalists think much about the actual people; same with “content” for the information obtained.

She instead prefers the term “eyewitness media,” which emphasises the originality of photos, videos and other materials people outside a news organisation contribute. She thinks media outlets should be focusing more on listening to the audience so that they feel they are a part of the journalism.

There’s sometimes a disconnect between how to work with eyewitnesses and the footage they’re capturing, she said. Some managers “have never sat on a breaking news desk with TweetDeck in front of them.”

News organisations have encountered issues when working with eyewitness media: The graphicness of content available on social media has made them reconsider what’s appropriate to publish. They’re not having conversations about what to do when an eyewitness of an incident is shaken up. Questions remain about licensing agencies and the lack of ethical guidelines behind them, and the popularity of chat apps is changing how media is gathered and distributed.

What should be a core skill — and what’s not being taught properly in journalism schools — is verification, Wardle said. News organisations should be transparent in how they verify information, which can help build trust, she said.

Moreover, the audience solicited for media or opinions should not be treated as numbers; their contributions should be valued.

“They (the media) constantly ask us for our views,” Tim, a participant in a focus group she conducted, said to David, another participant. “It is as if they don’t care who we are or what our specialisms are in; they just want views for the sake of having views.”

“I think it would improve things if they stopped saying, ‘Whatever your views, we want to hear them,’ to ‘If you know something about it or have actually been directly affected by the event, then get in contact with us,’” David responded.