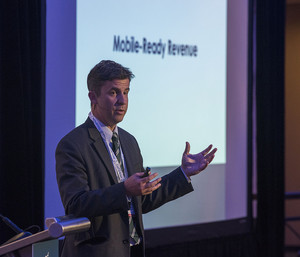 “Our vision is that we want to automate everything. … About 70 percent of our inventory can now be bought by programmatic. Next year it will be 90 percent.” – Remco Steen, Manager Programmatic Trading at TMG (Telegraaf Media Groep), the Netherlands

“We’ve done a lot of training because people have been afraid of programmatic, and if you’re afraid of something, you don’t want to work with it.” – Robert Johansson, Head of RTB and Programmatic, Schibsted, Sweden

[Editor’s note: WAN-IFRA has published a report, “The impact of programmatic advertising on news publishers.” More information is available here.]

“I like to talk about what makes great content. First, stop hard selling – stop telling everyone you are the best and putting your logo everywhere. … Great content cannot be improvised. You need journalistic excellence,” – Fred Hurkmans, Commercial and Marketing Director, NewsMaster, Belgium

“With video, you need to decide are you being strategic or opportunistic (ie. ‘We need to do video because there’s a lot of money there and everyone else is doing it’)? … It’s fine to be opportunistic – as long as you don’t think you’re being strategic.” – Sorosh Tavakoli, Senior Vice-President, Ooyala, USA

“We’re seeing very high completion rates – with more than 62 percent of viewers across the board watching the whole video,” says Zohar Dayan, Co-Founder & CEO, Wibbitz, which automatically creates short videos from text stories in only 5-10 seconds.

“Data is the Holy Grail of advertising. Those able to provide the most accurate & specific data to the advertisers will get the biggest piece of the cake. It’s all about the data,” says Gilles Raymond, CEO, News Republic, USA.