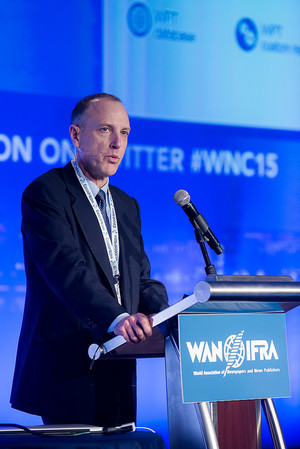 A profound shift in the newspaper business model, evolving for years, is finally here.

“The basic assumption of the news business model — the subsidy that advertisers have long provided to news content — is gone,” said Kilman, who presented the survey at the 67th World Newspaper Congress, 22nd World Editors Forum and 25th World Advertising Forum in Washington, D.C. “We can freely say that audiences have become publishers’ biggest source of revenue.”

Newspapers generated an estimated US$179 billion in circulation and advertising revenue in 2014 larger than the book publishing, music or film industries. Ninety-two billion dollars came from print and digital circulation, while $87 billion came from advertising, the survey said.

But the survey showed that newspaper advertising revenues are falling nearly everywhere, while circulation revenues are relatively stable.

“Print used to be one of few traditional marketing channels and often the one that was the most ubiquitous for branding and logical choice for all marketers,” Kilman said. “This direct relationship of mutual dependence no longer exists. Advertisers nowadays have more than 60 different advertising media channels available to them.”

“However, in 2015 it is clear that the story of the newspaper industry is not one of doom and gloom and decline,” Kilman noted. “Newspapers around the world are successfully proving their value to advertisers despite booming competition. They are discovering new markets and new business models that are today as pertinent to news production as advertising and circulation revenues. From print newspaper businesses, they have transformed into true multiplatform news media businesses.”

Though newspapers are now ubiquitous on all media platforms, the measure of their reach and influence continues to be mired in the 20th century, largely relying on print circulation and a variety of separate, non-standardized measures of digital reach. The challenge for the industry is to measure reach of newspaper content on all platforms with new metrics.

The World Press Trends survey includes data from more than 70 countries, accounting for more than 90 percent of the global industry’s value. The data is compiled through an enormous undertaking by dozens of national newspaper and news media associations and generous support from global data suppliers: Zenith Optimedia, IPSOS, ComScore, the Pew Research Center, RAM, and the ITU.

The future is mobile

Eight out of 10 smartphone users check their device within 15 minutes of waking up. It’s a fight for audience’s attention and mobile has it.

“When it comes to new revenues, we have been talking about the year of mobile for the last 10 years,” Kilman said. “It has finally happened. In 2014, desktop Internet usage globally decreased in favour of mobile. And mobile app usage is becoming the majority of all digital media activity in the United States.”

“Around 2.7 billion people around the world read newspapers in print and more than 770 million on desktop digital platforms,” Kilman said. “However, there is increasing evidence — from countries with sophisticated and robust metrics — that print and digital combined are increasing audiences for newspapers globally. Data from Australia, for example, shows that nearly 86 percent of all adults read newspapers on some platform. In the United Kingdom the figure is 83 percent. And in Chile, in is nearly 82 percent.”

Print circulation increased +6.4 percent globally in 2014 from a year earlier and shows a five year growth of +16.5 percent. This is the largely the result of circulation increases in India and elsewhere in Asia; the newspaper business in India is still the healthiest print newspaper industry in the world. Updated Indian figures have significantly affected the global picture and they partly come from a growing number of publications in India.

“Globally, more than 93 percent of all newspaper revenues still come from print, and print will continue to be a major source of revenue for many years to come,” Kilman said. “At the same time, newspapers around the world are investing efforts and are increasingly innovative in turning the business model from two-dimensional to multi-dimensional.”

While digital advertising represents a small part of overall newspaper revenue, it continues to grow significantly, increasing 8 percent in 2014 and 59 percent over five years, according to PricewaterhouseCoopers. But the main benefactors of digital ad spending continue to be social media and technology companies. Google takes the biggest share, with 38 percent (US$19.3 billion) of digital ad revenue. Facebook took nearly 10 percent in 2014, and is the biggest recipient of total digital display and mobile display advertising revenue.