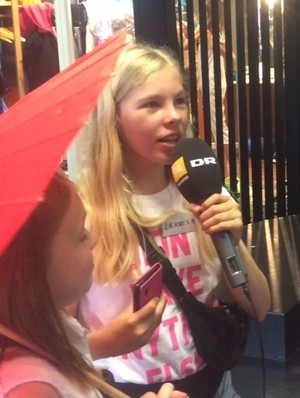 The boot camp is a worthy initiative in itself, but the truly interesting part is that they will learn through simulation, play and also real work at newsrooms in a nationwide project that lasts three months and includes a research component.

The 11-year-olds traveled from seven fifth grade classes across the country are spending their first week of training in the Journalism for Children programme at the Capital of Children facility in Billund. Through role-playing, case studies and projects they will learn researching, interviewing and focusing stories for different media and platforms. Courses will continue on weekends and during school holidays and include other camps, online meetings and internships at DR Ultra (the Danish children’s television channel) and Kids’ News (a weekly newspaper for children from Berlingske Media). Journalism students from the University of Southern Denmark are acting as mentors, and Microsoft is providing tools and hosting activity days.

“This is an educational program for children who dream of being journalists, are curious about the society surrounding them and are passionate about telling stories for both children and adults,” says Mette Højborg, CEO of the Capital of Children Office. ” We have a special focus on offering children such fun and exciting opportunities to learn through play and to become creative members of society.”

Play may be a goal, but the participants are already taking the experience very seriously, including moving into their own independent work much more quickly than the organizers expected. One student told the group that “Journalism is cool because I get to say and show what I want instead of just doing what my teacher says”. Another one said, “Here I can ask the adults why they do what they do.”

Capital of Children itself emphasizes that the partners have jointly designed the project with a strong emphasis on putting the children at the center of all processes with the opportunity to reshape “real” content.

“It’s an educational journey,” Kirstine Vinderskov, the editor for children’s emissions at DR Ultra when the project began explained on Capital of Children website. “We will not train mini-versions of adult journalists. Children journalists must be able to inspire and challenge our traditional news concepts and show us the world as seen by children.”

Berlingske’s Editor-in-Chief Jens Grund, also emphasized the benefits of the two-way approach: “News media must take children seriously both as an audience and as sources.

It is not easy, but our journalist kids can act as ambassadors for their peers and help the news industry gain new knowledge”.

The Lego Foundation and the city of Billund jointly created the Capital of Children Office in 2012 with ways for children to learn through play, such creating media, exploring entrepreneurship and learning chess.

In support of a key research component, the adults in the journalism project are committed to keeping a very open mind about whatever the children produce. The research will examine how the children approach communication and be modeled after work this fall that will call for 4000 children to build their own musical instruments and then play them in concert.

“We’re not interested in seeing how far and how quickly children adopt the habits and workflows of adult journalists,” says Aslak Gottlieb, director of studies. “We’re interested in seeing what the children themselves develop after they’re introduced to the basics of journalism: ways of telling stories, choice of sources and angle, use of digital platform and such.”