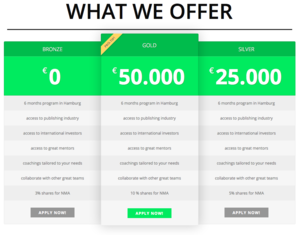 By their first round deadline on 15 July, nma.vc had received almost 100 applications for five places, all competing for up to 50,000 euros, in exchange for up to 10 percent equity. Their focus is on startups that offer “information experiences,” as the website explains, “creating information and making it a valuable experience for your users” or at least helping in that process.

It’s been two years since Meinolf Ellers, Managing Director of dpa-infocom, the German press agency, took his CEO to Silicon Valley. Together, they saw a gap in the market for a “neutral accelerator” in Europe; in other words, an accelerator focused on media startups, but not owned by any one corporate entity. This suited his own organisation’s DNA. As Ellers describes it, “we belong to 190 media providers.” He now spends about a third of his time as chief marketing officer (CMO) of nma.vc.

The nascent startup hub occupies a niche somewhere between the government-funded Dutch Journalism Fund (SvdJ) and Axel Springer’s Plug and Play partnership in Berlin. While nma.vc has sponsorship and support from the City of Hamburg’s Next Media project, investment funds come from a shared pot.

First ever matter.vc teamsBoth SvdJ and nma.vc share a common inspiration: matter.vc in San Francisco. An outlier in a city focused on purely on tech disruption, the garage hosts and supports an ever-rotating cast of journalism startups, attracting eclectic entrepreneurial talent, from ex-Wired journalists to tech-savvy Finnish stand-up comedians (yes – we’ve met them!).

Notably, matter.vc is funded and driven by news media companies – with founders KQED, Knight Foundation and PRX recently being joined by Associated Press and McClatchy among others.

With that role model in mind, it’s not surprising to learn that among the 10 investors in nma.vc’s European venture, five are media companies.

“In 24 months we want to accelerate up to 20 startups with the help of a $2m fund.”
– Jennifer Schwanenberg, Programme Manager, nma.vc

We have to wait until 10 October to learn who has won a chance to take a desk alongside the nma.vc team in the co-working space Betahaus in Hamburg.

So in the meantime it’s useful to look at the longer-running Dutch equivalent in Amsterdam. Despite being focused on the Dutch market, SvdJ receives roughly 90 applicants a year to the Innovation Programme, with seven or eight being selected.

One of their success stories is per-article payment platform Blendle, which, following investments from the New York Times and Axel Springer, hardly needs introduction. As they start to expand into Germany, founder Marten Blankensteijn points out that it’s difficult for journalism start-ups to get investments back home in the Netherlands.

“Most VCs are very scared of the media industry. And publishers are not into risky investments, so we struggled for years to get funding. The journalism fund gave us our seed money, 100,000 euros, which enabled us to build the product so we could do demos,” says Blankensteijn.

René van ZantenWith a couple of years’ experience under their belt, SvdJ have had a chance to develop and improve their incubation process. When we met with their Managing Director, René van Zanten, in May, he told us: “It’s difficult to get subsidised, but success rates are going up and we know how to select better, plus we coach people more than we used to do,”

This is clearly the long term goal for nma.vc. And instead of just looking within one country, they can cast their net across Europe – where they already have applicants from 10 different countries. And if they can find the next Blendle, surely investors will be happy.

You can visit betahaus Hamburg, home of nma.vc, during WAN-IFRA’s Innovation Tour 1 at our Expo on 5 October