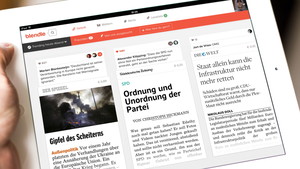 The service officially started on 14 September of this year following a beta phase. The company declined to say how many users had signed up in the first two weeks, but said it has 450,000 users all together. That would represent the total for the Dutch and German services.

Blendle co-founder Marten Blankesteijn said in an e-mail interview, “This number is so much higher than I could have ever expected, when we first launched our service one and a half years ago in Holland. Most of the people using Blendle today are much younger than your average newspaper subscriber, and many of them are paying for high quality journalism for the first time in their lives.”

Blendle, which started operations in the Netherlands in April 2014, is based in the Dutch city of Utrecht.

Nearly all major publishing houses in the country are on board: Gruner + Jahr, Axel Springer, FAZ, Spiegelverlag and DuMont, among others.

The leading German-language Swiss daily, Neue Zürcher Zeitung, has joined the offer with its daily and Sunday editions and NZZ Folio monthly magazine, as has Reportagen, a Swiss long-form magazine.

The Wall Street Journal, The Washington Post and The Economist are also available.

Blankesteijn said in June in a news release, “In the last 12 months we proved in the Netherlands that there is a new market for publishing houses, apart from subscriptions and advertising.” Blendle is generating more revenue for publishers than Apple is, he continued, and, “more importantly: It is revenue from people who formerly did not pay for journalism.”

In Germany, Blendle competes with a few other independent online kiosk services such as Pocketstory. German publishing giant Axel Springer, which together with The New York Times has invested a total of US$ 3.8 million (about 3.4 million euros) in Blendle, offers content both via Blendle and on the basis of subscriptions to its paywall-protected sites.

As in the Dutch service, publishers determine the prices of individual articles and keep 70 percent of sales revenue. Articles range in price from about 15 to 89 euro cents. Users purchase credit via bank transfer, PayPal or credit card, and then buy articles.

If a user purchases multiple articles from a single issue of a publication, he or she pays a maximum of the price of the full issue. Users can get their money back for an article if they are not satisfied and click an option that describes why not (“I clicked the article by accident” and “The price is too high” are among the options). Blendle says the refund rate among Dutch users is about 5 percent. If a user claims too many refunds, the function is deactivated for him or her.

Like the Dutch service, the German service is far more than just a supermarket for articles; curation plays an important role in the editorial model. A team of five young journalists combs the latest articles every morning for the most interesting and important ones. Their recommendations are highlighted on the site and in a newsletter. And of course social media are closely integrated.

One of the questions surrounding Blendle from its beginnings has been whether the concept will work in larger markets. After all, the Dutch-language market for online journalism is relatively small (as an indication, Wikipedia says Dutch is the first language of 23 million people). So it will be interesting to see how the service in German, the native language of nearly four times as many people, evolves.

In our e-mail interview, Blankesteijn said, “Our mission is to make the world’s best journalism available to everybody, so currently we’re talking to publishers on three continents. We’re preparing to announce Blendle in one more country by the end of the year, and three to four additional countries next year.”

The real test of the Blendle model, of course, would be posed by the U.S. and/or U.K. market(s), because of the availability of massive amounts of English-language online content free of charge. Would the platform’s convenience, ease of use and curation strength be sufficient to attract a critical mass of users in the USA, for instance?

Co-founder Alexander Klöpping told TechCrunch in June that he is confident it would. “More and more content from publishers goes behind hard paywalls (WSJ, FT, Time Magazine, etc.) or metered paywalls, Blendle works as an EZpass for journalism, with all publishers that join. And we’ll only launch if we have the majority of publishers on board,” Klöpping told the site. “We think it can be great for the U.S. market.”

He said Blendle’s micropayments system holds promise for publishers not only as a revenue stream but also as a gateway to selling subscriptions. Klöpping explained that in the future, when reading an article, users will be able to sign up with one click for unlimited reading in that publication, according to TechCrunch.

[This post has been updated to include the latest information on titles participating in Blendle Germany.]