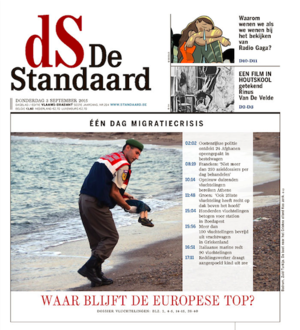 The hashtag #KiyiyaVuranInsanlik, meaning ‘humanity washed ashore’ was trending on Twitter within hours of the pictures being published. El Pais described Aylan as “the symbol of the plight of Syrian refugees fleeing civil war in their country and the Islamic State.”

The photographs are deeply disturbing, raising questions as to whether it is ethical to be printing and sharing the images of the drowned child.

Some publications, like the Daily Express, chose not to print the harrowing photographs at all. Others, particularly online sites, warned readers first of the distressing images. Others, worldwide, however, printed the least disturbing photograph on the front cover on their print editions.

El Pais and De Standaard were among the publications to print a photograph of Aylan’s body being carried by a Turkish police office. The Independent, UK, and La Stampa, Italy, however, are two of many newspapers that made the controversial decision to share the picture of Alyan’s body lying face-down in the sand. Both newspapers justified their decision.

In a front page editorial for La Stampa, Editor-in-Chief Mario Calabresi wrote, “Can you publish photos of a dead child on the front page of a newspaper? A child who seems to sleep, as one of our children or grandchildren? Until last night, I always thought not.”

After initially deciding not to publish the image, Calabresi described how he changed his mind out of respect for Aylan Kurdi:

“It demands each of us to stop for a moment and become aware of what is happening on the beaches where we went on vacation. Then you can resume your life, maybe outraged by this choice, but aware.”

Many hope that these unavoidable images will not only raise awareness amongst the general public, but also put pressure on European governments to do more to help those fleeing Syria. Adam Withnall in an article in The Independent asks “If these extraordinarily powerful images of a dead Syrian child washed up on a beach don’t change Europe’s attitude to refugees, what will?”

The Emergency Director for the Human Rights Watch, Peter Bouckaert wrote an article ‘Dispatches: Why I Shared a Horrific Photo of a Drowned Syrian Child’ in which he says, “Some say the picture is too offensive to share online or print in our newspapers. But what I find offensive is that drowned children are washing up on our shorelines, when more could have been done to prevent their deaths. It was not an easy decision to share a brutal image of a drowned child. But I care about these children as much as my own. Maybe if Europe’s leaders did too, they would try to stem this ghastly spectacle.”

Writing in the Guardian, Roy Greenslade said: “This is the kind of iconic image that will surely be republished for many years to come because it encapsulates, in a single frame, the tragedy of people fleeing from oppression and willing to take extraordinary risks in order to reach safety in the west”.

The phenomenal public reaction to the photographs has been likened to that of the young Vietnamese girl, Phan Thị Kim Phúc, running naked on a road after being severely burned on her back by a South Vietnamese attack in 1972. This level of response from the public, and the decision of many media publications to share the photographs, reflects a turning point in the public perception of the harsh reality faced by refugees.