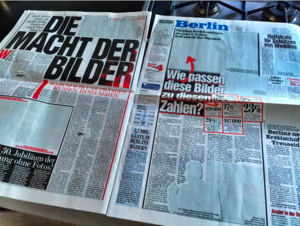 Readers would have noticed that in today’s (8th September 2015) Bild newspaper, and on the Bild website, all pictures have been removed. This has been done to show the importance of photography in journalism and, primarily, as a sign of protest against censorship and complaints from readers about the daily newspaper’s decision to publish the images of drowned Syrian toddler, Aylan Kurdi, which triggered immense worldwide shock and controversy last week.

Bild Editor-in-Chief, Kai Diekmann, shared this image on Twitter this morning of the newspaper’s front page.

Bild posted an article on their website explaining its decision to remove all pictures from their publication. Bild said that the images “caused dismay and compassion”, but more importantly they “rattled a million people awake”. It argued

“The world must see the truth in order to change”.

In response to the images of Kurdi, there has been an outcry from the public for European governments to take more action to help Syrian refugees.

These images divided media publications all over the world. Whilst many newspapers shared the images, others hesitated. Times of India said in a statement “TOI did not publish this photo of a Syrian toddler’s body washed up on the Turkish shore of Bodrum on Wednesday because we felt readers may find it very disturbing.” But a day later the paper rescinded that decision and published the pictures after taking note of the the wave of outrage the picture generated.

Amol Rajan, the editor of The Independent, UK, one of many publications which chose to print the images, said in a statement “Ultimately, we felt – and still do – that the power to shock is a vital instrument of journalism, and therefore democracy. Our motivation wasn’t avaricious; it was to shock the world into action.”

Bild’s bold decision to remove all photos from their publication has generated an overall positive response. Martin Daubney, a columnist from The Telegraph, UK, took to Twitter to share his view.