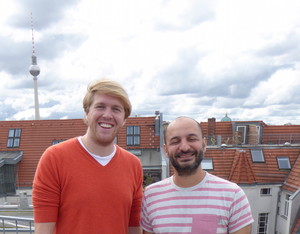 A brief look at Quora shows that job hopping is common in tech jobs – although in the wider world, the trend may be going in the opposite direction, at least according to The Washington Post. At any rate, Forbes suggests we should be changing jobs more regularly in order to boost our career and pay prospects.

That’s the reason we are up on the fifth floor of a converted Berlin apartment block talking about how the average company uses 8-10 classified sites, and is engaged in an ongoing “war for talent”.

Jobspotting grew out of their co-founder and CEO Hessam Lavi‘s experience running berlinstartupjobs.com. With Hessam’s expertise in search, including several years with Google’s own Search Quality team, they had the idea for a data-driven recommendation engine for jobs classifieds and joined the second batch of startups at Axel Springer Plug & Play, which is where they met Robin.

Robin’s impressive networking skills, family background in media, and his experience setting up and running the Axel Springer accelerator, ensured their joint party with Slush in January attracted 2,000 people. I lost the many threads of the story, but it seems singing Frozen at Pete’s Piano Bar in SXSW is a top networking tip.

The company is in the middle of a Series A funding round and the two co-founders have an exhausting treadmill of late evening dinners with potential investors.

Although Robin says “there is an evolution in the jobs classifieds market”, he believes product disruption without revenue (in the tradition of Instagram or Twitter) is really hard in Europe.

That is part of the reason the Jobspotting team is so heavily tech focused, with eight backend engineers out of 12 working in their office: there is a lot of focus on being able to show a high quality finished product, as opposed to an early beta.

Looking up to the Jobspotting office, Berlin‘For 10 years nothing has happened’

As Robin sees it, there has been little innovation in online jobs portals in the past 10 years. The old model, with customers prepared to pay €40k for a half-page newspaper ad, is dying fast, and there are only two different kinds of players: A) jobs portals like Stepstone and Monster and B) aggregators

Jobspotting want to offer a pro-active search for the user. As Robin puts it with classic startup hyperbole: “The mega trend of recommendation has reached jobs classifieds.”

An obvious competitor is LinkedIn, which bought bright.com last year in order to drive job recommendations, largely powered by the Skills & Endorsements section of user profiles.

But so far they only link to jobs that have been originally posted on LinkedIn, not the wider market.

Jobspotting searches further afield and, according to Robin, has a more sophisticated engine that goes beyond keywords to look at the hierarchy and relation of skills, job clusters and user likes and searches within their app or website.

‘I never want to compete with my partners’

Ultimately, Jobspotting sends traffic to partner sites, but their proposition is that their traffic is “five-times more relevant than anybody else”, enabling them to charge a premium for the referrals. Additional revenue comes from charging companies to take control of their own auto-generated pages on Jobspotting – complete with trends and statistics.

This is growing market, and competitors for the title “Tinder for jobs” include The Muse, glassdoor, and whitetruffle. Whatever happens next, news publishers will have to get 100 percent more savvy to keep a slice of the online jobs market.