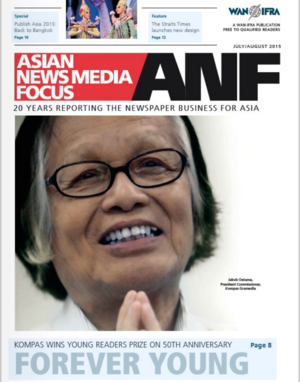 Gilles Demptos, Director of WAN-IFRA Asia Pacific, met several Kompas executives, including Jakob Oetama, the paper’s co-founder and president, to learn the reasons for this enduring success and long-lasting spirit of innovation for the most recent issue of WAN-IFRA’s Asian Newspaper Focus, a condensed version of which we are re-publishing here.

To remain relevant to a younger demographic – millennials, as the coveted generation aged between 15 and 32 years old is currently tagged – is a common challenge for all legacy businesses whose customers are rapidly aging.

As we know all too well, the digital natives’ way of consuming exclusively free content on a multiple array of devices, favouring instantaneous social media channels – such as Instagram, Snapchat or other chat apps – is critically disrupting the sustainability of the current news media business model.

These awards highlight more particularly strategies that benefit not only the media companies and their young audiences but also society as a whole. The Yomiuri Shimbun, the Seattle Times, and Swedish Public Television are some of the media companies that were honoured this year, while the most prestigious prize – News Publisher of the Year – went to Kompas.

“Kompas Daily provides a sustained and committed effort to not only promote brand loyalty among young people but also to engage and teach about how to be a more civically active democratic citizens,” noted the Young Readers Prize jury.

First published on 28 June 1965, Kompas (in English, “Compass,” a name then suggested by the father of Indonesia’s Independence, President Sukarno) originated from the idea of publishing a newspaper to fight the communist press.

P.K. Ojong and Jakob Oetama, two journalists who were also teammates in the management of the Catholic Association of Indonesia and had previously jointly launched the Intisari (Digest) magazine, in 1963, agreed to undertake the project. Under their guidance, the newspaper rapidly evolved to become a fiercely independent, non-confrontational and truly humanistic publication.

“We try to be independent. We have our own editorial policy, our philosophy,” says Oetama. As President Commissioner of Kompas Gramedia, Oetama, who will turn 84 in September, proudly witnessed the anniversary celebrations of the newspaper he had created 50 years ago.

“Humans and human values are the primary value for all (our) employees,” writes Agung Adiprasetyo in his CEO message published on the media group’s website. “They are reflected in the work of Kompas Gramedia every day, be it in print, electronic, and other products that contribute to the public enlightenment, writes Adiprasetyo.”

“Enlightening People” is the motto that Kompas Gramedia has chosen for expressing the essence of its mission. “We also made this newspaper to educate our people,” Oetama says.

This objective guided Kompas’ first diversification into bookstores (the group now owns more than 100 stores all over Indonesia) and book publishing in the 1970s.

Although the media group also expanded into other information and communication businesses in the subsequent decades (radio, television, magazines) as well as other businesses, such as hospitality, Oetama is especially proud of the Multimedia Nusantara University (UMN) that Kompas Gramedia launched in 2005.

This educational vocation is also vivid within the Kompas newspaper itself. “We have to use the new technology. We have our own group of R&D (Research & Development) people who study the development of newspapers and other media,” says Oetama. For example, various members of this group had just come back from a study tour at The New York Times at the time of our interview.

“Our R&D plays a central role for supporting the editorial. (…) We try to learn from the experience of other international newspapers to overcome the problems that the print media is facing,” says Ninuk Mardiana Pambudy, Deputy Editor-in-Chief at Kompas.