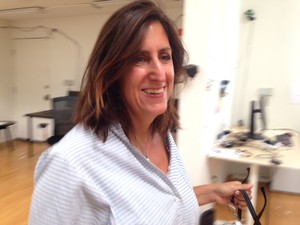 We meet Nonny de la Peña – aka the Godmother of Virtual Reality – in her new studio in Santa Monica, California. De la Peña, who has a background as a journalist and documentary film maker, has spent the past two years as a Senior Research Fellow in Immersive Journalism at USC’s Annenberg School of Journalism and Communications. What is coming out of her studio is nothing short of ground-breaking in journalism terms.

There’s been a lot of coverage lately of the fast emerging world of virtual reality. Unfortunately (but perhaps not surprisingly) a lot of the focus has been on tech. Forget for a moment, all the photos of people wearing big face-covering goggles with a cable running out the back. Remember the Holodeck on the Starship Enterprise? That’s what we’re talking about.

Through computer graphics, and using traditional journalism sources like audio, witness accounts, photos, police records etc, de la Peña’s team recreate situations, often with a human rights element, and puts the viewer in the scene. “Whether the audience decides to take action or be passive, they are actually in the middle of what is going on.”

There’s a very important distinction to make here. Much of the recent VR coverage has been about 6 or 16 or more GoPro camera rigs, filming in 360, creating a virtual reality scene from a fixed point. That is cinematic VR, and (if there’s only one camera rig involved) the viewer is limited to turning their head to look around.

What Nonny de la Peña does with computer generated models created in a gaming engine like Unity, lets the audience walk around, look behind objects, explore the scene. The Holodeck. “The two approaches will marry; there will come a point where what you film can be instantly turned into computer models,” says de la Peña.

Her projects include a piece called Hunger in Los Angeles – a chaotic scene from a crowded pavement outside a food bank, where a man in the queue has a diabetic seizure and collapses. It premiered at the 2012 Sundance Film Festival, and de la Peña says the reactions were an aha-moment for her.

“The first lady who watched it was crying when she came out of the goggles. This happened again and again and I began to realise the impact of this medium.”

More recently, de la Peña was commissioned by the World Economic Forum to create an immersive journalism piece to try and tell the plight of the children affected by the violence in Syria. The piece consists of two scenes; one from a street in Aleppo when a bomb goes off, and one from a refugee camp. Project Syria was shown at the WEF in Davos, after which de la Peña took it to the Victoria & Albert Museum in London for five days. “There was an extraordinary outpouring of emotion from the people who experienced Project Syria that week. I think virtual reality does generate empathy in a way that is unique to the medium, because it allows people to, in effect, go through the television screen and into the story.”

Jaunt Studios: Time to shift focus from tech to story-telling in VR

Grant Anderson, Jaunt VRDown the road, along Santa Monica’s Olympic Boulevard, which has become something of a tech centre, we meet Grant Anderson, Head of Studio for Jaunt Studios. The company literally moved into its new premises the day before our visit.

Jaunt, which just secured a Series C round of funding, started out as a tech company and has its head quarters in Palo Alto. In the summer, the company launched Neo, an advanced 360 camera and software, which together solve a lot of technical issues you get with the GoPro rigs, including stitching, dynamic range and image quality. The camera is not aimed at consumers, it’s purely for the use of Jaunt’s partners and creative teams “who will push the boundaries of VR.” The camera and software solved, Jaunt is now focussing on being a content and platform company, hence the set-up of the Jaunt Studios division in Los Angeles.

Originally Jaunt produced a unique app for each app store and each piece of content  – now there’s a unified Jaunt VR app. “There is not doubt that it’s smartphone apps combined with Google Cardboard or Samsung Gear that are going to bring VR to the mass market. Then it remains to be seen what impact the three higher end goggles will have,” says Anderson. The HTC Vive, the Oculus Rift (developed by Palmer Luckey and sold to Facebook for 2 billion dollars) and the Playstation VR (formerly Project Morpheus) are all expected to hit the market Q1 next year.

Grant Anderson worked on VR at Apple in the mid-90s, as a Quicktime Engineer. He was involved in one of the first successful consumer VR products: a CD-ROM walk-through of the Starship Enterprise (Startrek again). “That’s what we’re aiming for.”

In the meantime, the technology is struggling to keep up with creators’ imagination.

“We are so close to solving so many things, and once that’s done we can focus on the story-telling. At the moment people are trying to force 2D nomenclature into VR which doesn’t work, it’s truly a new medium. We have to figure out how to direct and shoot for that: there is no “behind the camera”.

There is no doubt that, as this new medium gains momentum, VR presents an interesting opportunity for publishers. In a time of increased ad blocking, offering users virtual reality experiences of compelling stories could be a way to build both loyalty and revenue.