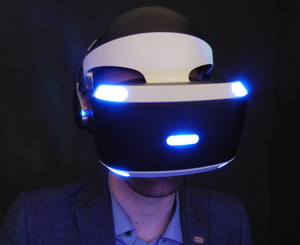 My five (non-exhaustive) takeaways from the IFA consumer electronics fair at Berlin Messe:

1) VR is ready for prime time. Even at Berlin Tegel airport you can dip your head into a virtual aquarium with Samsung Gear VR and the Galaxy Note. But at IFA my first experience with Sony’s Project Morpheus was on another level entirely (see photo). In the demo of EVE: Valkyrie, one of the likely launch titles for 2016, I found myself in the cockpit of a spaceship with a full 360-degree view of neighbouring planets, asteroids and enemy craft. Ships flew at high speed right to left or up and down, and I could follow them the whole way round by moving my head. The device feels very light, head tracking is smooth thanks to the bright LEDs on the helmet, and with 120 fps, there was no feeling of nausea, simply immersion.

News media takeaway: your audience is going to start spending significant time in these environments. How will you reach them? Animated news channel TomoNews already launched their first 360 VR video about the train shootings in France.

Xiaomi Yi GoPro / Kolor clone2) 360-degree video is getting cheaper. Now fully owned by GoPro, Kolor‘s Freedom 360 rig allows you to clip in six GoPro cameras to offer a full surround experience on YouTube or with Google Cardboard. At US $500 for the rig and $700 for the software to synchronise and stitch the footage together, costs are dropping rapidly. And Xiaomi Yi even 3D-printed a clone as a tribute! But bear in mind: Some professional 360 video makers like Purple Pill VR use up to 16 GoPros as well as ambisonic mics; that’s where the price goes up.

News media takeaway: As costs fall on both camera equipment and the gadgets needed to view 360 video, now is the time to experiment.

3) There are drones/quadcopters to fit every journalistic budget. The Parrot mini-drones might be fun to fly and play with, but the focus at IFA was on the gimbal underneath – the mechanism that stabilises the camera and allows shudder-free video. Companies like DJI and AEE have all the drones you need to shoot up to 4K video, and the software is catching up fast, with Sony demonstrating judder-free video footage on heavily vibrating bike handlebars.

News media takeaway: Soon no news broadcast will be complete without an aerial shot – but consider getting an extra-long selfie stick instead!

4) Wearables already look dated. The second-gen Moto 360 with its circular bezel might look like a watch, but the interface has the same familiar (and gently confusing) Android Wear interface. They might be useful for showing notifications, but it seems unlikely that people will spend time on watch apps, even if the Apple Watch now has 10,000 apps. The fitness wearables market is growing rapidly, but the crowds around Fitbit and Runtastic were sparse. And a vanilla Swatch-style plastic watch that saves your runs and interfaces later with your smartphone hardly feels very modern. And of course you can’t read your notifications.

News media takeaway: For now, focus on getting your notifications right, on both phone and smartwatch.

5) 4K will tax OTT (over-the-top) content providers to the max. If you are a publisher just dipping a toe into the waters of web TV and OTT, your content is going to be less than stunning on a new LG or Sony 4K TV – despite their near-ubiquity at IFA. BT will launch BT Sport Ultra HD shortly, but it will be a long time before internet bandwidth supports this content on your Amazon Fire TV stick or Apple TV. Until then there is a risk of on-demand channels looking like the poor relations on the latest TV devices.

News media takeaway: For now you can save money on your OTT licensing deals – 4K will simply not be practical for a few years.