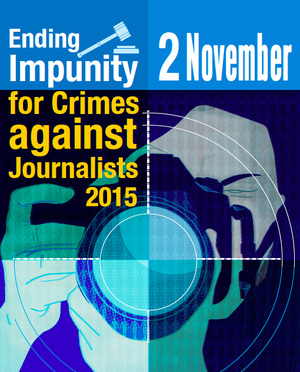 As the Director-General of the United Nations agency with the mandate to promote freedom of expression and press freedom, I stand up to publicly condemn each killing of a journalist and call for a thorough investigation.

In the past six years, I have publicly and unequivocally condemned more than 542 cases of killings of journalists, media workers and social media producers who generate significant amounts of journalism.

With attacks on journalists on the rise, UNESCO spearheaded the United Nations Plan of Action on the Safety of Journalists and the Issue of Impunity, to end impunity by promoting concerted action among United Nations agencies, working across the world with governments, civil society, academia and the media itself.

This work is bearing fruit. There is growing international recognition of the
importance of improving safety of journalists and of ending impunity. The United Nations General Assembly, the Human Rights Council, as well as the United Nations Security Council have all adopted landmark resolutions specifically addressing these obstacles – as has the Council of Europe at the regional level. More and more States are establishing new laws and mechanisms to tackle impunity and improve safety of journalists. Judiciary systems and security forces have increased their engagement on the issues.

The challenge remains steep. At this time of great change, when all societies are transforming, we must redouble efforts to end impunity for attacks on journalists, in order to advance the right “to seek, receive and impart information and ideas through any media and regardless of frontiers” enshrined in the Article 19 of the Universal Declaration of Human Rights. This is vital for achieving Sustainable Development Goal 16.10, which calls on us all to ensure public access to information and protect fundamental freedoms, in accordance with national legislation and international agreements.

Every time the perpetrator of a crime is allowed to escape punishment, this
emboldens other criminals and creates a vicious cycle of violence.

I urge States to take all the necessary measures – through legislation, protection mechanisms, and new adequate resources – to ensure that investigations and trials relating to crimes against journalists are undertaken.

I urge everyone to stand up on November 2 and demand that the rule of law is fully applied when journalists are attacked and killed in the line of duty.

This is UNESCO’s message on this International Day to End Impunity for Crimes against Journalists.