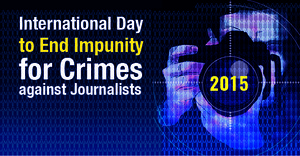 The safety of journalists has become one of the most pressing issues for defenders of freedom of expression says Guy Berger, Director for Freedom of Expression and Media Development at UNESCO. “More than 700 journalists have been killed in the last decade alone, and according to the latest report by UNESCO’s Director-General on the Safety of Journalists and the Danger of Impunity, less than 7% cases of journalists killed have been resolved.”

“This impunity sends the message to society that killing a journalist will almost never have consequences for the perpetrators. But enhanced media coverage of the issue of impunity can help to change this,” says Berger.

UNESCO, as the UN agency that leads on these issues, is encouraging informal partnerships with different media houses in order to raise awareness amongst the general public and policy makers alike.

How you, as editor, can help

The momentum at the international level continues to build, says Berger, as evident by the recent adoption of a United Nations Security Council Resolution on 27 May 2015, which urges “Member States to take appropriate steps to ensure accountability for crimes committed against journalists”, especially in situations of armed conflict.

This year, various events will be organized by UNESCO and its partners in New York, Paris, London, Amsterdam to use the International Day to End Impunity to raise global awareness and increase accountability, with the goal being to secure justice for journalists who have suffered attacks.

But Berger believes that much more could be done to end impunity and that the media can play a major part in this. “If this position strikes a chord with you, please do know that UNESCO stands ready to provide expertise, updated facts and figures, infographics, samples of how other media have covered the impunity, and expert interviews. These can be freely utilized by each media house according to your own editorial decisions and standards.”

“We do encourage you to consider coverage of impunity in crimes against journalists not just as once-off content, but rather as part of a planned sequence, and also that you nominate a person to lead this. That individual could serve as focal point for further communications with UNESCO, should you so wish.”

Some ideas for coverage include:

 programming a debate with experts, journalists and governmental officials;

 producing a short video to highlight the safety of journalists worldwide, mixing animation with graphs and numbers;

 broadcasting a film or a report on a specific case of journalists who have been killed in the line of duty; or

 interviewing representatives of UNESCO or of an NGO specialised in the defence of freedom of expression.

More information and resources are available online on a dedicated web page for International Day to End Impunity 2015: www.unesco.org/new/en/endimpunity.

Unesco’s Mr. Mehdi Benchelah (email m.benchelah@unesco.org; tel: 33 (0)1 45 68 14 49) is on hand to assist journalists and editors with statistics, interviews and images.