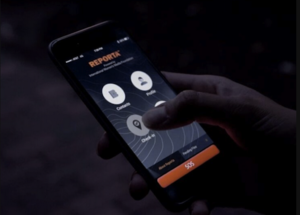 The app, called Reporta, is a downloadable freeware on smartphones and allows journalists to check in with their editors, sends customized alert and call for emergency help. Within days of its release, the IWMF is making changes to its app in response to questions and criticism by the security industry.

“Journalists covering conflict zones, working in repressive environments, or reporting on sensitive or highly charged issues are too often the targets of attacks,” said Elisa Lees Muñoz, Executive Director of IWMF in the press release. “Now more than ever, it is critical to equip journalists with a free tool to help them stay safe and best positioned to continue to tell the significant stories of our time.”

With continuous cost cuts on foreign bureaus, news agencies are increasingly parachuting people into a breaking news scene or simply hiring freelance journalists, who often do not have access to resources to keep them safe. The publicity and intimidation impact of killing journalists also make them clear targets, as highlighted by the brutal beheading of James Foley and Steven Sotloff. Last year, Committee to Protect Journalists reported that 61 journalists have been killed and 211 jailed for doing their jobs.

Carrying a satellite phone and a dedicated tracker or an SOS locator has been standard practice for many reporters from big news organisations on the front line. However, such expensive equipment may often be inaccessible to young freelance journalists and many simply resort to using mobile phones, social media or emails as their tracking and alert tools.

While Amnesty International developed a “Panic Button” Google app in 2014 geared towards human rights activists, Reporta app is the first app designed for journalists to combine the function of panic button, a regular-check-in and alert system into a single application, said Muñoz in an interview.

Equipped with six languages including Arabic, English, French, Hebrew, Spanish and Turkish, Reporta sends an email with your location to your contacts if you failed to check in at the pre-determined internal, sent an alert or activated SOS. The message can include a photograph, video and voice recording. Failure to check in and activating SOS will automatically lock the app which can only be reactivated with a code that is sent to your contacts.

For reporters, the app simplifies tracking and call for help. For editors, it relieves them from anxiously waiting for phone calls to know where reporters are. More importantly, with the various check-in messages, the app creates a tracking record of the reporter’s whereabouts and when the reporter fails to check-in, the immediacy of sounding alarm is crucial.

“It makes all the difference,” said Javier Garza, an integrated operational security trainer for Global Journalist Security and safety advisor to the World Editors Forum. “Because it sends you an alert immediately when a check-in is missed, you can narrow down the radius of where the reporter is and quickly respond.”

Such detailed tracking gives rise to security concerns, as what can be used to save you could just be as dangerous in getting you killed. The app has data encryption and a two-step authentication. User information is purged to keep the least amount of data on the device. Data sent from the app is also stored behind a dedicated firewall on a dedicated server, according to IWMF.

Within a few days of it release, however, security professional raised concerns about the app including the fact that its code are not open sourced, meaning it is impossible for the wider security community to determine the quality of its code and audit process, its use of Google Analytics which stores unencrypted data on users’ phones and doubts about IWMF’s capability to secure sensitive information on its server as it is likely to be targeted by hackers. Some also criticized the fact that the app was developed by a company that describes itself as a “full service digital marketing agency” instead of one that specializes in security.

In response, IWMF announced last Friday that it will make its code open. Muñoz has also decided to purge all data that was previously intended for additional research purposes. “We were convinced the only secure data was data that does not exist,” explained Muñoz.

IWMF is continuing engage in conversations with the security community and expects the code to be available in two weeks, at which time more revisions and updates are expected. “Like any app development, it’s never finished,” said Muñoz. “We don’t consider this to be the end of conversation but the beginning of getting more feedback because we want to make sure that we are taking every measure to make this app is as secure as possible.”