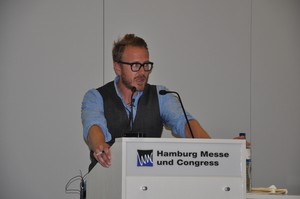 They do not compromise content creatives, he said. “They are our lifeblood.”

Three years ago they said they needed more digital content creators, more data-based journalists, and so on, Stewart said. However, they could not increase headcount, so they made the decision to completely outsource the copy desk in order to be able to hire more content creators.

“Is our competitive advantage having 30 copy editors or 30 content creators? For me, the content creators win every time,” Stewart said, adding: “I wouldn’t go back on that decision for anything.”

For the latest general election, he said, “We put all the digital creative content people in a room and said, ‘Create the kind of digital content you think people are going to read, and we’ll get out of your hair’.” Among the developments that grew out of that process was a great interactive campaign finance tool.

“It’s a truism of our business that the newsroom sometimes gets sick of something before the public has a chance to get acquainted with it,” Stewart noted.

“It’s not enough to be relevant – we have to be necessary,” he added.

In order to do that, Stewart said some traditional reporting assignments must be rethought or even dropped.

“There’s no point in having people rewrite a story that has already been covered by a wire service or someone else,” he said.

“As someone said this morning, the commodity stuff has got to go by the wayside. Having photographers from 30 different news organisations shoot the same photo of a guy outside a building is not going to cut it,” he said.