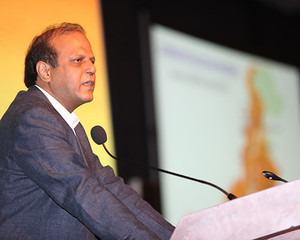 Zaffar Abbas is the Editor of DAWN newspaper in Pakistan, the oldest and most widely read English-language paper in the country. Zaffar has for many years been passionately engaged in the life of WAN-IFRA, and in particular the World Editors Forum, where he sits as a member of the board and provides advice and assistance on a number of its programmes and initiatives.

“I want to give you an idea of what we have been trying to do here in Pakistan on the issue of impunity for attacks against journalists and media houses. In the last few months, we have made significant progress in setting up an editors’ forum to work towards highlighting the issue. It is a forum exclusive to both newspaper and news television editors, with the sole aim being to highlight incidents of attacks on journalists and to pressurize the government and other stakeholders to take action against the perpetrators of such crimes.

The Open Society Foundation first floated the idea for this kind of collaboration, but we took it on and have since worked at giving it near formal shape. Initially, a few of the editors expressed their reservations on the need to have a separate forum. The argument presented by some was that since there is already a formal association of newspaper editors in the country, which is supposed to deal with all issues related to media, there was no need to create another body. But ultimately some of us managed to convince everyone that this new forum would have just a one-point agenda, and would not indulge in any other issue.

Editors of almost all the prominent English and regional-language newspapers are now on board, and so are many editors (for some reason they are referred to as ‘director of news’) from most of the prominent television channels.

For the time being, and until a formal shape is given to this Forum, I have been chosen as the convener, and we are moving step-by-step to give it a formal shape.

The first stage was to set-up a WhatsApp group called ‘Editors for Safety’. On this forum we try to communicate on a regular basis about the threats that individual journalists or media houses are receiving from militant groups or government organizations. The rule is that if the editor of a particular news organization reports a threat or an attack on a journalist from her/his organization, and requests coverage, then all media houses are expected to give the issue as much publicity as is possible. This is followed by discussion on possible editorials, not only to condemn the incident, but also to pressure the government into taking action and provide security to the targeted media house and its workers.

The next step, if this forum is found to be useful, we may call another meeting of the editors to discuss a future plan. This might include collective, or simultaneous, write-ups on the unsolved cases of journalists who have fallen in the line of duty, and to further pressure the authorities to bring the culprits to justice. There is also a proposal to assess the possibility of creating some kind of fund (probably with the help of other organizations or philanthropists) to help families of the victims, or journalists who are constantly facing threats and need to be relocated to a safer place.

It is worth mentioning the background to some of the difficulties or challenges we faced in setting up such a forum. In Pakistan, most of the newspapers are privately owned, as are the satellite television companies (and there are about two dozen 24/7 news TV channels!). Like in most other countries there is constant competition to be first, or to come up with exclusives, which is quite healthy. But at the same time commercial interests, and owners’ personal rivalries, have created a kind of barrier where rival newspapers and TV channels rarely mention the names of their competitors, even when stories are lifted or violence takes place. So, even in the case where a journalist is killed or injured in a targeted attack, the line of most newspapers and TV channels is “so-and-so from a ‘local newspaper’ or ‘private TV channel’ was killed in an attack.”

What we have tried to do is to persuade most of the newspaper and TV editors to focus just on violence against journalists and media houses. So, even if their respective managements are of the view that their rivals should not be identified by name in their publication, in the case of an attack against a journalist, this rule will not apply. Barring a few papers and TV channels, we have succeeded to an extent that most editors have managed to convince their managements this is all about the safety of journalists, and has nothing to do with competition or commercial interests. As a result, when there were two recent incidents of attacks on journalists, most of the newspapers and TV channels mentioned the name of the television station and newspaper where the journalists were working.

I am hoping that with better coordination through the WhatsApp group, and probably once we have another round of meetings, most of the newspapers and TV channels will have come on board. Once that happens, we will move to the next stage to discuss strategy to further pressure the government to bring the perpetrators to book, and explore the possibility of helping the victims’ families.

It’s not easy, and some editors believe it will be difficult to sustain such a mission. But a few of us believe it is worth the effort, especially in a situation where most of the cases concerning the killing of journalists remain unsolved, where threats to life and property are quite common, and where in many parts of the country correspondents operate in an atmosphere of fear, receiving threats both from militants and security forces.”