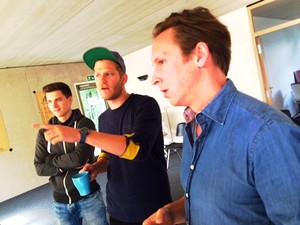 Since we wrote about nma.vc back in August, they have have made two important announcements.

First of all, they released the list of their key publishing industry investors. Brought together by the German press agency, dpa-infocom, the group includes: Gruner + Jahr, Zeitverlag Gerd Bucerius (better known as Die Zeit), Libri, Weischer.Media, and medien holding:nord (publisher of sh:z).

On one perspective this is a purely financial bet, with each contributing to an investment pot of US$ 2 million over two years, which buys them a varying amount of equity in upcoming companies. But the true benefit comes from the connection to the startup ecosystem – staff from the German publishers help mentor the projects and get a much better understanding of the circles of venture capital investment. And ultimately, this is a war for talent.

No matter how innovative they are, regional publishers in Germany have to fight hard to keep up with larger tech players, and indeed with Axel Springer that now regards itself as a tech company competing directly with the giants of Silicon Valley. Newly qualified web developers and data analysts do not immediately think of their local publisher.

Association with a tech accelerator supported by both dpa and the City of Hamburg boosts the smaller brands and makes them more attractive to young tech talent – in short supply at media houses across the world.

The second announcement from nma.vc is their list of the first batch of startups – cut down to a highly select three. Note to Startups Reading This: Yes, that means there are still two places available!

Briefing for nma.vc batch oneAdTriba is a marketing attribution system that allows small- to medium-sized companies to validate their online marketing campaigns.

Spectrm delivers new content from your favorite authors in WhatsApp.

SPOTGUN (see main photo with Chris Royla from nma) is an interactive second-screen app that recognises which commercial is running and gives the users quizzes to play.

Now the contracts have been signed and equity has been shared, the pressure in on until January 2016 to get the first results and get nma.vc on the road.