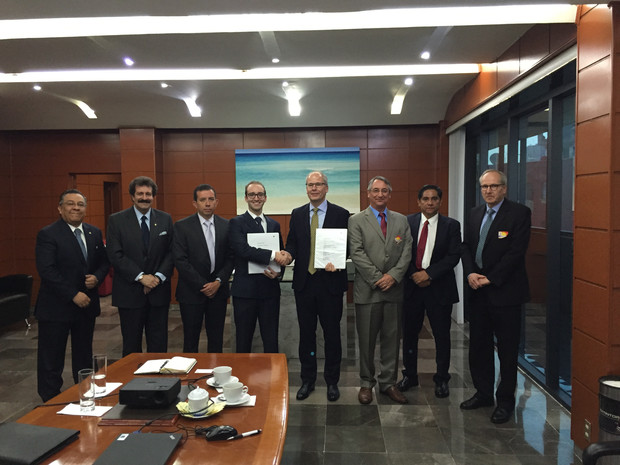 Organización Editorial Mexicana (OEM), the largest newspaper publisher in Mexico and Latin America, is a good example of a traditional media company aggressively trying to transform into a multimedia company. And the company took another big step in that direction today when CCI told us on the eve of LATAM 2015 that OEM will make a significant investment in a full suite of cross-media publishing solutions from CCI and Escenic.

Once implemented, it will serve 63 titles in 25 Mexican states and be used by 3,500 newsroom employees in different news departments. The company chose the complete CCI NewsGate and Escenic Content Studio platform, which includes publishing for print, online, tablet and mobile, as well as detailed newsroom performance analytics.

“Journalism will never die; on the contrary, it is becoming increasingly relevant,” said Francisco Torres Vázquez (fourth from left in photo), CEO of OEM. “But how can we survive and keep up with the current times and try to anticipate what is to come? This is the challenge that OEM is attempting to tackle.”

According to World Press Trends 2015, print circulation in Latin America rose +3 percent during the past five years, while print newspaper advertising increased +27.68 percent in the region. Those are encouraging figures compared to many parts of the world, but naturally it’s the digital side of the equation that is creating challenges.

As WPT emphasised, mobile usage around the world, particularly with smartphones, is also pervasive and having a huge impact on news media. And Mexico is the leading mobile market in Latin America, as one-third of all residents use smartphones, according to eMarketer. By 2016, more than half of all mobile phone users in Mexico will have smartphones, compared with 45.7 percent for the region at large. That combined with the fact that Mexican Internet users spend an average of 6 hours a day on social media, means that publishers like OEM have more avenues to grow their audience, but face the sometimes daunting challenge of how best to do that.

“Our current management team is conscious of the need to drive technological advances in a bid to develop a multimedia strategy. This vocation for transformation is what is guiding our current efforts,” said Vázquez.

Talking to numerous technology vendors at our recent World Publishing Expo, I was struck by how many of them told us that, not only their customers but also their potential customers are asking them for pointed advice about how to transform.

It would appear that was the case with CCI here.

The goals of OEM’s “transformation project” were laid out as follows, said the CEO:

OEM had an American experience to draw from looking into CCI and Escenic: Gannett, the publisher of USA Today, works with one CCI NewsGate data centre and five production hubs, serving 5,000+ newsroom employees across 92 titles. OEM also looked at how The McClatchy Company works with CCI NewsGate and Escenic across 29 U.S. markets.

“When the decision was made to break into the digital era, we sought a company that shared our philosophy and had a product that was sufficiently developed and had the proven ability to meet the needs of a group as big and diverse as OEM,” said Vázquez.

Ultimately, he said: “One of the deciding factors was that it had a range of products – NewsGate and Escenic – to meet our needs in terms of mobility and collaboration.”

OEM would seem to have a big footprint and resources to embark on its stated transformation ambitions. It: