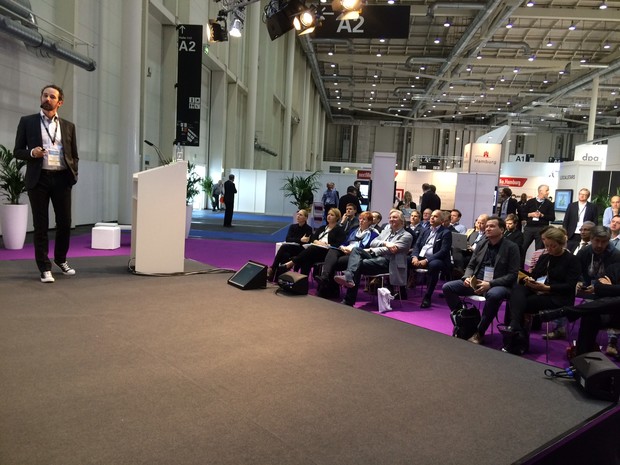 Van der Meij is Head of Revenue Development for TMG in The Netherlands, and primarily responsible for the company’s advanced offer and know-how with programmatic. He founded the company’s separate business, Publisher Market, an ad network and company focusing on programmatic services.

We interviewed him shortly after the session.

Considering all the work you have done at TMG setting up the programmatic network, etc., and working with clients, is there still that level of reluctancy on part of publishers/sales staffs to embrace the potential of programmatic? And why?

I think the biggest issue is that it’s hard for them to keep up with all the changes that are still happening (in the digital advertising ecosystem). You can’t have a programmatic strategy for 5 years. It’s a matter of adapting as soon as possible. So I would say that lack of knowledge is the main reason.

Initially, TMG set up a separate sales staff for programmatic from the direct sales team… first of all, why that approach?

We took a publisher approach and didn’t want to compromise too much on our sales team. So instead of trying to reform them we just created a new team next to them, controlled by the publisher so we could focus on net revenue instead of revenue.

And as I understand it now, you are actually integrating the sales team and programmatic teams? Why now?

The reason why there is no “programmatic” anymore is because it’s business as usual. We do have Adops people with a focus on a certain system but that’s not different from traditional sales (video vs.  display as an example). With the emergence of the “all-in-one” systems, we are getting into the era where programmatic and direct (sales) are the same.  So for the sales… most sales people focus on selling (product / price / quantity) and the agency teams just set out the conditions for the bigger agencies – what’s basically a custom rate card for them (product / price). Then they can buy whenever they want (quantity).

I recall you saying about a year ago that the technology involved in this complex digital ecosystem is massive, but that like with any technological development, you adapt and embrace and get on with it. Now you said TMG is integrating many of the different platforms/ad servers/analytics under one platform. Seems like a huge undertaking… expand on that.

In this industry we have seen a consolidation over the last years. What’s happening now is the consolidation of technology. We’re moving away from “one trick pony” tech and more and more parties are building end-to-end solutions. Google / Appnexus / Adform are a few… Because we saw this coming a few years back, TMG decided to get on board early so we could have influence on the final product.

How have you seen other publishers leaning toward more direct and premium programmatic offers?

Look at Schibsted. They are doing very interesting things with Appnexus.

Ad blocking is increasingly an issue, or looks like it will be a bigger issue in the near future, particularly on mobile. How could this potentially impact programmatic, outside of the millennial audience?

The impact is big. A lot of traffic is coming from mobile. However, from a revenue perspective, mobile isn’t that big. So even with a 100% ad blocking installation rate, it wouldn’t hurt publishers’ revenue as much as expected. It would force them to look into other revenue models for mobile.

WAN-IFRA produced a research report earlier this year, “The Impact of Programmatic Advertising on News Publishers.” WAN-IFRA members can download the report for free.