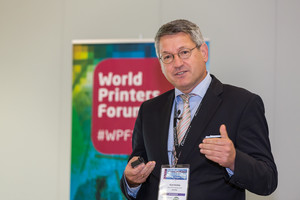 In order to try to improve on their efficiency and try to cut costs further, Kribitz said his company decided to invest in a integrated production management system to better manage the production of their printing plants in Austria and Croatia and boost their productivity.

“For central planning we would like to see where there are extra hours, where there is room for capacity, and so on, and be able to set up reports for KPIs (Key Performance Indicators),” he added.

Stryria’s management thought that a software tool could give them the best possible chance of success, Kribitz said.

‘We needed to be as exact as possible’

“As a newspaper printer, we were set up in a very lean way,” Kribitz said. “We had a total of 28 processes. We needed to be as exact as possible for the software provider.”

He noted that Styria has several sites in different locations where they wanted to use the software, and it would have to support several languages and currencies. “It’s not easy to find a provider that can do all this,” Kribitz said.

He said the company already had software from SAP across all their accounting processes and also their customer processes, but not for the technical part of the printing plant, which is not included as an SAP product.

“We would love to have one controlled system, like SAP, but the print shop wanted to have it at only one level – in one unique, single system,” Kribitz said. “And of course we needed to have an interface with SAP. It was important for us – it’s not a one-time thing, it’s a relationship that will last years or decades.”

In the end, Styria selected EFI-DIMS based on price performance as well as the fact that their software package could be easily adapted. In addition, he said the company also showed a major commitment in supporting solutions for the newspaper industry, which is not always common today. They went live with EFI-DIMS at their two printing plants in Austria on 1 April this year.

The next step is to transfer the system to their printing plant in Croatia, Kribitz said, and added that the process is nearly complete and that 1 November is the scheduled go-live for Zagreb.