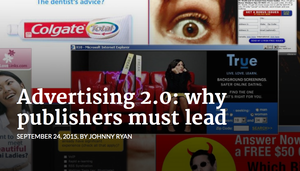 But make no mistake, as Ryan pointed out, ad blocking has been around for a while and is gaining increasing momentum – momentum that will not subside unless publishers act soon.

A visit to PageFair’s About Us section of its website offers this “simple” pledge: “We help websites survive the rise of adblock.” And keeping it simple, Ryan laid out the bare essence of how ad blocking works, the clear threats, what has been tried, and what might actually work.

Ad blocking apps are proving very popular with the general public for two reasons – first, they block annoying ads such as pop-ups (or pop-overs) and second, they allow sites to load much faster.

This is a huge issue for publishers who stand to lose billions of dollars worth of advertising revenue that is not loaded or therefore seen by their readers.

Ryan noted that so far, the following three kinds of measures have been tried by publishers, but they have all failed – some of them massively:.

Ryan recommends avoiding the third choice, putting back ads but making sure people do not rebel against those ads.

One of the key first steps has been taken through an initiative that he helped to organise with WAN-IFRA and Digital Content Next. A group of major publishers and key industry representatives met in London last month and the result of this meeting was a Call to Think for the industry in how to respond to this threat and make the most of the opportunity.