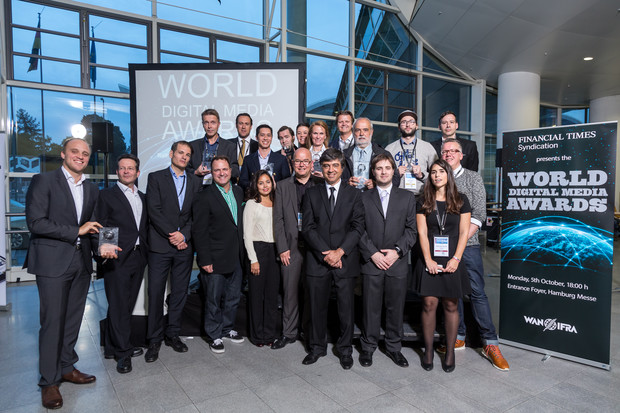 The awards were presented tonight at the start of the annual get-together after the first day of the World Publishing Expo in Hamburg. Here is a look at the full list of this year’s winners and what made their entries special and successful.

A genuinely global news site with input from three continents, the Guardian has made waves with big ticket campaigns such as Snowdon and government surveillance but retains the loyalty of its readers with less talked-about but no less worthy stories about health and women’s issues that don’t always feature on rivals’ home pages.

Guardian News and Media’s unrelenting pursuit of a digital-first agenda, including its in-house metrics analysis shared with journalists has made it a leader in technology but not at the cost of forgetting the basics of good news. As judge Mario García of García Media put it; “Perhaps one of the best digital displays for any newspaper in the world. I like the way the brand is carried out digitally, but also how storytelling plays such a key role. Well done.”

George Nimeh, the former Chief Digital Officer, underlined the potential of creativity in overcoming obstacles when he observed that “we decided the ad-blocking stories we hear today are sending a signal, and that signal is about non-transparent data gathering and the cost to the consumer of the speed it takes to download so we needed to do something about that. Part of the result was a cross-media campaign about the work of OMV in supporting women and education which aimed to bring the excitement of science to the very young and allow users to choose to receive the marketing message implicit within it.

The power of storytelling by chasing down the raw data; the team from NBC identified and examined every single murder in the country after being inspired by the effect provoked by a single missing girl story. In the process, they made clear the role of mental illness in murder rate and with that highlighted the importance of taking mental health seriously. An amazing work of journalism, backed with powerful visuals; “The graphics are elegant and original. An outstanding journalistic work supported by data,” noted judge Ismael Nafría of Grupo Godó.

Speaking at the awards ceremony, NBC journalist Elen Borge Kristoffersen added candidly that “if we had known in the beginning just how much work was involved, we probably never would have got started, but one of the best things in the end was making it possible for readers to follow every single case – to see how many victims were women, what professions they did, everything about the story.”

There were joint winners in this category: Axel Springer, Germany, and Aftenposten, Norway

Joint winners are a rarity at WAN-IFRA because the results don’t come down to sentiment but a careful system of points. This time, however, the judges’ combined points ratings set these two products as being outstanding equals.

EPOS, claimed to be the best app of 2014 in the German market, is a popular science and history magazine specialising in vivid storytelling, while Aftenposten+ prompted judge Mario García to describe it as, “One of the best newspaper tablet editions: clarity of navigation, excellent combination of short and long content. Good photography and an overall look and feel that reflect the spirit of Aftenposten.”

Designed to appeal to a younger demographic DIE WELT launched KOMPAKT in May 2014 as an iOS-only app. KOMPAKT is part of WELT kompakt, DIE WELT’s daily compact format. Downloaded and installed more than 100,000 times, 50 percent of its users are 30 or younger. “It’s a fantastic app” noted judge Garret Goodman of WOCHIT. “Besides its design and simplicity, it offers a new approach to creating and consuming content. Its mobile innovation goes all the way to the content … the courage to do something new is impressive.”

Rousing worldwide appreciation of the passion behind Argentinian football was the flag bearer for Grupo Clarín’s Ecosistema Digital projects of interrelated and mutually supporting social media and digital creation. “Clarín has a strong and active presence on Facebook, Twitter and other social networks. Also the big data use for personalized content offering is highly innovative” observed Rosana Fuentes Berain of Mexico Media Lab.

MinMote, a fashion website complete with a range of daily tips and inspiration, introduced e-commerce to allow users to shop directly from an article with a single click as the mood took them. In describing the project, the company said its “commercial collaboration with Sobazaar played a crucial role in bringing in new revenue while maintaining editorial integrity and giving the user a simple and user-friendly buy option. We wanted the user experience to be very simple so they could actually get a true idea visually of the clothes that they are going to buy.”

Project: It Changed My Life Series

An outstanding example of the raw emotional power of the medium in the hands of an expert, and a shining example of cross-media collaboration. The “It Changed My Life” Series started with a senior writer on the newspaper profiling people who had undergone dramatic transformations and he then worked with the media group’s star film-maker, Shawn Lee Miller, who managed to get the traditionally shy and insular Singaporeans to recount their astonishingly moving stories in a series of videos that combine cinematic quality with online-friendly, three-minute formats.