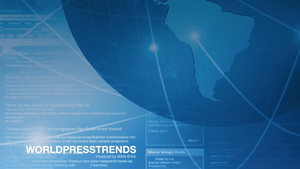 Online, some 800 million access newspaper content digitally, or nearly half of all desktop Internet users. There has never been a larger audience for newspapers.

Newspapers – both print and online – produce nearly US$ 180 billion in annual revenue, larger than the book publishing, music or film industries.

These are just a few of the facts contained in the World Press Trends 2015 report, the definitive guide to the global newspaper industry published by the World Association of Newspapers and News Publishers (WAN-IFRA) and released Monday during the World Publishing Expo in Hamburg, Germany.

The report, free to WAN-IFRA members and for sale to non-members, can be found here.

WAN-IFRA on Monday also launched a new interface for its World Press Trends database, which now includes interactive graphics, more information and is easier to use.

“A lot of the accepted wisdom about the newspaper business is based too often on assumptions and anecdotes, and is often a partial picture or even completely wrong. With World Press Trends, we are providing critical insights into what is really happening, backed by the numbers,” said Teemu Henriksson, Coordinator of the World Press Trends project at WAN-IFRA.

The report includes data on circulation, readership, advertising revenues and digital publishing trends in more than 70 countries, accounting for more than 90 per cent of the global industry’s value. The report is compiled through an enormous undertaking by dozens of national newspaper and news media associations and through support from global data suppliers including Zenith Optimedia, IPSOS, ComScore, the Pew Research Center, RAM and the ITU.

Some of the findings:

More data from World Press Trends can be found at https://wan-ifra.org/wpt.