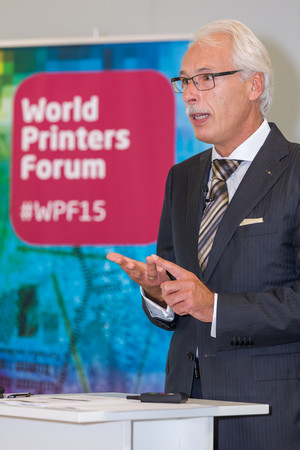 Tietz, CEO of Rheinisch-Bergische Druckerei, the large printing centre in Düsseldorf, Germany,  made this declaration during the World Printers Forum in Hamburg during World Publishing Expo 2015 earlier this month.

Over the course of the next few years, at least on the German market, Tietz said that some newspaper publishers will no longer be able to run their own purely newspaper printing plants. “If you focus mainly on newspapers, as a printer, you might well find that limits you in the commercial printing area because too many people think that you are too standardised to the newspaper market,” he said.

In essence, if newspaper publishers and printers want to survive or even thrive today, they truly need to open their eyes, and their offers, to the right markets. “Look for what is needed in your own regional market and what you can sell in your market,” he said.

Opening up your market and expanding the product range, particularly in the commercial sector, naturally brings economic opportunities. “The printing plant world becomes open,” he said.

Tietz also made a good case for the need for newspaper publishers to adapt new newspaper formats based on the A4 paper size. “The format issue is basically the point of departure for all considerations, not only for newspaper printers, but for the printing industry as a whole,” he said.

“The current newspaper formats are part of a business relationship that has been maintained and developed in small steps for many years,” he said. Moving toward A4 printing, however, would improve the economic efficiency of printing plants and give the publisher a significantly expanded product range for creativity in the newspaper print segment.

For example, he pointed out that by making adjustments to either their current widths and/or lengths, today’s Berliner, Rheinish and even the Nordic newspaper formats could be produced using A4-based printing technology within one printing plant. “That opens up markets and creates economical benefits for the printing plant,” Tietz said.

The point is that I use the press to produce a number of products that I’ve never seen before, he said.

“When you look at the products, you will see there are many, many things you can do,” he said. “You simply have to sit down with the suppliers of printing presses and discuss options with them. You’d be surprised by the number of possibilities,” Tietz said.

“It is a design issue at the end of the day,” he said.

‘The right time is now’

Furthermore, Tietz said there should be a sense of urgency about this transformation. “If you’re looking for the right time – the right time is now. You will never have the perfect time. Do it ASAP.”

The next few years will be critical for printers to stay on top of the trends, not just in newspaper printing, but other printing sectors, he said. “The traditional borders between the printing processes are dissolving. This trend will continue with sheet-fed printing and gravure printing being the ‘losers,’” Tietz said.

We can survive, Tietz said, but to do this, you need a good sales organisation and also a good customer orientation – “everything must be oriented toward the customer.”