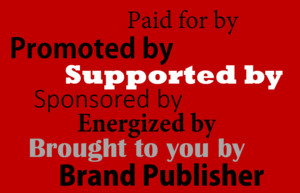 Clear labelling is a must but also an issue
Most publishers and agency content producers understand that clear labelling and transparency with readers are paramount to protect reputation. Some even go as far as emphasizing, with a different colour font and highlight, on each piece of branded content that “news and editorial staffs of The New York Times had no role in this post’s preparation.”

“If you want someone to trust your journalism, you want it to be as uncontaminated as possible by hidden influences or undeclared ones,” said George Brock, Professor of Journalism at City University London and a former Editor at the The Times. “There is no journalism that is 100% objective or neutral, if you want trust to be maximized, you want to be sure you declare any influence that exist.”

The Guardian has a three-tier labelling system:

Despite this three-tier labelling system, Anna Watkins, head of The Guardian’s native advertising arm the Guardian Lab, is worried that it is still not clear enough. And she has reasons to worry, because the “sponsored by”-label on many publications means that the content is actually made by the brand, rather than the brands just providing financial support with no editorial oversight. Besides that, other publications may use “presented by,” “promoted by”, “brand publisher,” for different reasons, and sometimes publishers change their labels as they evolve.

And sometimes even clear labelling might not be sufficient if the content was not carefully screened. The Scientology sponsored ad on The Atlantic was a stark reminder, which enraged both readers and staffers for its overly laudatory content. All publications we interviewed have stated that brands must meet certain criteria before becoming a client, and if they don’t they will be turned away.

Written by.. a Journalist or Content Creator?
Besides clear labelling, there is a need for transparency on who produces the content under what circumstances. Almost everyone we spoke to mentioned the importance of separating native content creators from the editorial team. “We are pretty much siloed from the editorial team,” said King-Balentine of T Brand Studio of The New York Times.

Dutch journalist Ebele Wybenga pointed out the difficulty of cross fertilisation between journalism and commerce in his book on native advertising called The Editorial Age. In 2013, Het Financieele Dagblad, a Dutch newspaper, posted a clear label on a news article on pension funds: “Paid for by Aegon, yet 100% journalistically independent”. But after investigation by Follow the Money, a Dutch collective of investigative financial journalists, it turned out the editorial independence was arguable: “while the information offered will most likely have met the standards of reliability expected of a quality newspaper like Het Financieele Dagblad, Aegon’s agenda may well have been advanced by the omission of information less favourable to insurance companies.”

We asked The Guardian if its “supported by” content risks the same ambiguous journalistic independence, as it refers to journalism supported by a brand without any editorial influence from the brand. Guardian’s Watkins laughed it off and said she could not imagine that happening as reporters in The Guardian frequently bash advertisers and she often had to face irate customers.

“There is complete editorial independence here, we just broker the deal, the editorial sometimes don’t even know the brand,” said Watkins, who admitted that she has had to walk away from clients because some wanted guaranteed coverage or required favourable reporting.

“It costs more to maintain that distinction [between editorial and native advertising] and there is very, very large institutional tension,” said Brock. “Publishers have to constantly police a large amount of negotiation and adjust their rules since we are exploring a new form of advertising.”

Still, some media companies have decided to directly involve editors in brand content creation. Time Inc. Chief Content Officer Norman Pearlstine has said that it makes sense for editors to be involved as long as it’s transparent. Just earlier this year, Condé Nast announced that it is enlisting its editorial staff to work on branded journalism because if ads are to be as good as editorial, editors should make that content. When it launched its first native advertising campaign this summer, Condé Nast emphasized that it has has received “zero backlash” from readers. Just a few weeks ago, culture and fashion magazine Nylon announced that it is combining the role of the chief editor and head of advertising in light of ad blocking.

While separating editorial and content creation is an easier distinction, combining the two roles can work but is riskier, said Brock, and it requires an enormous amount of vigilance to work. As revenue pressure leans in on publishers, Brock is not very optimistic about the future and said he is expecting a “spectacular disaster” where a media company will be exposed for slipping on journalism standards in exchange of an enormous bribe from a brand.

“I don’t like that prediction but the weight of money now been poured into these things is bound eventually to break the kind of care that people would have to give to stop it,” said Brock. “I am afraid that something will go wrong.”

Do we need an industry standard on labelling?
The demand for an industry labelling standard is emerging. “To be honest, we would rather that there is some global or national standard on labelling because every single media organisation is using something different,” said Watkins. “The clearest is when everyone has the same labels but it’s probably not going to happen because there are so many different publications with so many different views.”

Wybenga suggested that government agencies could step in to protect readers and consumers, should a standard not be created shortly. “It is in our interest to regulate ourselves,” he said on the phone. “If there are laws, it will hamper our ability to innovate.”
In the US, the Federal Trade Commission has been closely following the development of native advertising and meeting with industry organisations. A formal workshop was last held in 2013. “For us, the concern is whether consumers recognise what they’re seeing is advertising or not,” said Mary Engle, the FTC’s associate director of advertising practices, at an advertising conference in New York. There is talks about FTC potentially issuing a Native Advertising Guideline this year.

Brock recommended that the publishing industry meet with the advertising industry to discuss standards, operational details such as how to sign such contracts and make available the best practices and perhaps also the bad practices. “Each of these parties all have a stake in ensuring that native advertising does not crash,” said Brock.

In light of the many changes in advertising format and with the rise of ad blocking, the Interactive Advertising Bureau has put forth a non-binding guideline. The World Association of Newspapers is in the process of meeting with its members to discuss how media companies can better ensure standards and user experience.

It is still unclear what the long-term impact of native advertising will be for publishers’ reputation. Even though the trust in the media has been eroding over the years. Credibility level of newspapers in the US has fallen from 71 percent in 2000 to 62 percent in 2010 and 56 percent in 2015 according to Pew Research.