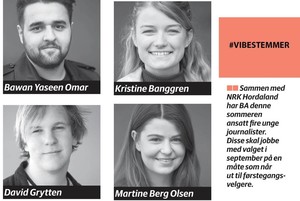 Young people are often labelled “lazy, not interested in politics, and egocentric,” says Marie Picoche, who fights exactly these clichés in her role as the 19-year-old head of the French organization Jets d’encre.

The millennial generation – roughly made up of 18- to 34-year-olds – is still a group largely sought after by publishers. They are accused of not wanting to pay for anything, yet everyone seems to want to have a piece of their pie. And that makes sense because many of them are entering their key spending years.

Understanding millennials’ habits
There are ways of monetising on millennial publications. Take theSkimm, a daily email newsletter which tells the major news stories in an under five-minute read. It taps perfectly into the habits and media consumption of this particular generation. And, it makes money through sponsorships.

“They have an audience that is valuable to advertisers,” says Kevin Loker, Program Manager of the American Press Institute (API). TheSkimm is created by Danielle Weisberg and Carly Zakin, two millennial news junkies who started their careers at NBC News. In order to understand their behaviour you need to either be a millennial, or “employ them, and listen to them,” as recommended by the API.

The Norwegian experiment: ‘Date a politician’
In Norway they did just that. During their local elections last September, the newspaper Bergensavisen, in cooperation with public broadcaster NRK, hired four students between 18 and 22 in a bid to reach first-time voters. They were given the freedom to cover the elections in their own way.

Their unconventional approach was immediately apparent in the content they produced: this video below in which they “date” a politician, for example, was an intriguing way to find out more about the politicians’ personalities in an informal, human setting.

A quick glance at the items produced during this experiment also shows how millennials tend to choose more diverse sources. API says that in the US, the millennial generation is “more diverse than any other generation,” and therefore, this needs to be reflected in the newsroom.

“They have a very direct approach,” said Anders Nyland, Editor-in-Chief at Bergensavisen. “They ask different questions, so they produce different stories than established journalists.”

The story matters, not the platform
Unsurprisingly, the four Norwegians made good use of social media. Their messages were notably short, take for example this 10-second video.

When it comes to reaching millennials, “you have to embrace not only their way of interacting with stories, but also their way of telling them,” says Anne Jacobsen, CEO of the Norwegian Media Centre. And by that she doesn’t mean chasing the latest platforms.

“They look for good stories, not the platform,” says Anne Jacobsen, CEO of the Norwegian Media Centre.

The point is to find new ways to tell stories. For example, telling them in partnership with the audience, providing services in the local communities that tap into the sharing economy or talking about what’s going on in the newsroom.

Senior editors & millennial journalists
Openness and transparency is something that appeals to this generation. “They share, they are open. They don’t have hierarchies normally, they relate very well to flat structures,” says Jacobsen, “it makes the whole setting different.”

Companies in other industries apply reverse mentoring schemes in which millennials coach baby boomers. These programs prove successful in bridging the gap between different generation. In a newsroom where diversity is crucial, you need senior journalists for their experience, combined with the new generation to adapt quickly to changing consumer behaviours.

Aditya Dhunna, a 22-year-old producer at the 24-hour English news channel NewX in India. He says that his job provides him with great opportunities at his age, but “the collaboration with senior editors is crucial.”