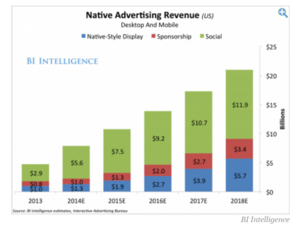 “Publishers and reporters were really really against native advertising five years ago,” said Ebele Wybenga, an Amsterdam-based journalist who published a book on branded journalism in 2013, The Editorial Age.

“Now we can discuss this with less shame because more people are doing it, this is not to say that all problems related to integrity are resolved, but it is easier to discuss it than before,” Ebele Wybenga.

The fall of advertising revenue is the biggest motivator for publishers to consider native advertising. According to Pew Research, overall ad revenue has fallen four percent last year in the U.S. to $19.9 billion, from a high of nearly $50 billion in 2005. While digital ad revenue is on the rise at three percent, it is not making up for the fall in print revenue which is down five percent.

Changing reading habits of readers are also changing how digital advertising is perceived. With more people consuming content on mobile devices – a figure that has increased by nearly 10 hours from 2012 to 34 hours in 2014 – fewer are willing to accept the interruptive nature of banner ads, pop-ups or pre-roll on smaller screens. Use of ad blockers is increasing rapidly, up from 21 million users to 181 million in the past five years.

Publishers are trying to fight back. Some are taking ad blockers to court, with one lawsuit already struck down by a German court, and some are forming a cold war escalation by courting vendors to circumvent ad blockers, others are appealing ineffectively with readers to support journalism. For a short period of time, The Washington Post tried to block users who use ad blockers, while German tabloid BILD is now forcing users to pay or turn off ad blockers.

A trend to go native

As the fight against ad blockers continues, the native advertising increases in appeal to publishers. This also reflects a trend among brands and marketers.

A few weeks ago, at the Association of National Advertising’s annual “Masters of Marketing” conference in Florida, U.S, Brad Jakeman, president of PepsiCo’s global beverage group, told a roomful of 2,700 advertising and marketing professionals that  “advertising” as it currently stands is “a model of polluting content that is not sustainable.”

A simpler explanation might just be an “uninterrupted form of advertising,” as Sam Slaughter, Vice President of content marketing company Contently puts it. Uninterrupted is key to avoid users turning on ad blocking. Since native advertising looks and behaves like editorial content, some say it is less likely to irritate users and will be more immune to ad blockers.

Though native advertising might have a trust problem and might be less read than editorial content, some research shows that native advertising receives 52 percent more visual focus than banner advertising, with higher reading rate, greater association and brand resonance. If its content is good enough, it might even attract social media sharing and become viral on the web.

In this series of articles, we will look at several different models used by news publishers. The first is one of the most successful, but also one of the most controversial.

One of the earliest publishers to embrace native advertising is Forbes. In 2010, it opened up its own content management system called “Brandvoice” to contributors and brands. Brands are allowed to publish their native advertisement for a monthly fee between $50,000 to $75,000 depending on the level of content promotion and syndication. Or they can choose a custom feature program for higher impact, starting at $200,000 a month.

The move was considered radical and many editors disliked the model, which they felt would dilute the quality of journalism. But Lewis DVorkin, chief content officer of Forbes, argued in a Guardian article that “journalists need to stop clinging to the notion they are the only authentic verifiers of truth” and “today’s audience wants to get information – expert insight from wherever it come, which can be from a journalist, an audience member or a marketer.”

It helps that Forbes is gaining traction amongst its readers and hence revenue. This year, the magazine has its second highest readership in its history at 6.3 million and 36 million unique visitors to its website in May. BrandVoice clients contribute to 30 percent of Forbes’ total advertising revenue and digital ad revenue constitute 70 percent. It recruited its 100th client last month.

In the 400 posts that are published daily at Forbes.com, only about 10 articles are from BrandVoice, said Ann Marinovich, vice president of advertising, product and strategy for Forbes in a phone interview, yet they can sometimes emerge as the most popular posts. “It validates to us that there is a place for branded content,” said Marinovich.

“Readers care about quality information, no matter where it is from, as long as it is bringing value,” Ann Marinovich.

Marinovich’s team and the Forbes editorial department are completely separate, but both are given the same publishing tool which means that whatever brands publish will appear just like any other Forbes article under the byline of “BrandVoice” and therefore not considered an ad. With the rise of ad blocking, Marinovich is aggressively recruiting more BrandVoice clients and has said that there is no limit as to the number of brands that can join BrandVoice.

To become a BrandVoice client, a brand needs to go through a selection process which ensure that only brands that provide quality content are allowed. Once approved, a Forbes brand manager will be assigned to the brand to monitor and provide guidance. In general, most BrandVoice content is created by the brands themselves and Marinovich noticed that many brands are beginning to form their own newsrooms. Her 20-person BrandVoice team is also available to help should the brands need guidance or talents to craft the stories.

The next blog in the series will look at how big publishers are creating content, including at the New York Times and the Guardian.

How will newsrooms operate once Covid-19 restrictions are lifted?

Editors must step up to help avoid climate breakdown