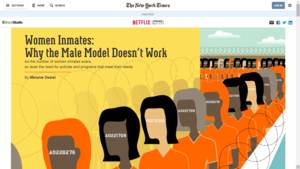 To produce good content, brands are beginning to form their own content teams, observed Ann Marinovich, Vice President of Advertising, Product and Strategy for Forbes. She works for Brandvoice, the native advertising content system through which companies can publish their native ads on Forbes website.

SAP, one of Forbes’ first BrandVoice clients, has nearly 20 people working on its native advertising content, and several are former published journalists. These content creation jobs they occupy are becoming more common. On LinkedIn, the title “Chief Content Officer” or “Content Strategist” yields more than 7,000 returns.

Content creation companies also emerged to help brands and publishers create compelling stories. Contently, for example, a content marketing company, has a database of 45,000 freelance journalists, videographers, photographers and producers. It has grown 400 percent year on year since its founding in 2010, and now has more than 100 staff with a new office in London this year.

Besides that, publishers now begin to look beyond their own needs and offer content creation services to meet the rising demand for branded content. And that makes sense: “Who is best at storytelling? Publishers!” said Joe McCambley, founder of marketing consultancy Wonderfactory.

In 2013, The New York Times got into content creation with its T Brand Studio, the Onion launched the Onion Lab, and the Huffington Post started HuffPost Partner Studio. In 2014, The Wall Street Journal introduced WSJ. Custom Studios and this year, Condé Nast and CNN both began offering creative content services to brands.

He amassed a team of top talent for T Brand Studio, such as Editorial Director Adam Aston, who is a senior reporter with bylines in BusinessWeek, The Guardian and The New York Times, and Kaylee King-Balentine, an Emmy-winning producer who oversees video production and now heads the newly opened London office.

T Brand Studio takes great care in making sure its native advertising content is in line with the New York Times’ editorial content. “Because we are associated with The New YorkTimes, we are incredibly conscious that we need to make content that editorial is proud of,” said King-Balentine. “Every brand, every piece of content, we are careful in ensuring that we respect the history and storytelling and the brand of The New York Times.”

Within two years of its launch, the New York Times has evolved its PaidPost offering from print to a full package of video and interactive features. Beginning with a long form article for Dell in early 2014, T Brand Studio moved into infographics with United Airlines and Goldman Sachs, ventured into mini-film productions with Cole Haan, a shoe brand. They recently created an interactive experience for Nest, a producer of fire detectors, to demonstrate how the use of synthetic materials in modern homes has diminished the time to escape in the case of a fire.

In a 12-month study done in conjunction with Chartbeat, an analytics company, that compared editorial content with PaidPosts, at least five PaidPosts were amongst the top 5,000 editorial posts on NYTimes.com. The PaidPost made for Netflix, “Women Inmates,” which was considered as the new “Snowfall” of native advertising, even made it to the top 1,000 posts. The New York Times publishes about 150,000 articles a year.

The question is what type of content does well. “We found two things that stand out, that worked [in native advertising],” said Bharwani, Chief Analytics Officer for Visible Measures, “one is content truly of a storytelling nature, touching, engaging, that classifies as entertainment; and the other is being truly informative, things that bring utility and inspiration.”

To expand its reach, The New York Times introduced Mobile Moments in August, which is mobile advertising that serves contextually tailored native advertising within its news app and in between article feeds. The ad can take the form of a graphic, video, interactive or swipeable series of short stories. Advertisers will be able to purchase space according to the seven exclusive day parts that they want to target: Prepare Me for the Day, Make Me Feel Connected, Help Me Plan, Update Me on Something I Missed, Help Me Follow a Developing Event, Understand a Planned Event, and Entertain Me.

Last year, the New York Times registered a 12 percent increase in digital ad revenue to $182.2 million where “inside 10 percent” can be attributed to PaidPosts. It has just released a new strategy to double its digital revenue by 2020. With strong demand, the Brand T Studio opened a new office in London last month to grow its international clientele. The team has grown to nearly 40 people from just nine when it started in 2013. It has created 100 campaigns for more than 60 advertising clients.

The Guardian launched its native advertising arm, Guardian Lab, early last year, offering everything from written editorial to video production, mobile experiences, interactive design and event organisation. The Guardian Lab’s website reads like a full functioning marketing agency, with emphasis on content, technology and data, including many illustrative case studies with a clear breakdown of project- and number-driven results.

Anna Watkins, a seasoned advertising executive was hired to lead the lab. She told us that they frequently take briefs from media agencies and compete in pitch proposals. Watkins has a track record at top advertising agencies and last served as the Managing Director at Interpublic’s Initiative. Consolidating existing teams, bringing back previously outsourced service and adding key executive hires from the advertising industry, her 133-people team has so far won nearly 100 clients and launched 250 campaigns in its nearly two years of operation. It has opened operations in the US and Australia as well.

In addition to writing articles and creating videos for brands like most other publishers, Guardian Labs has been putting together comprehensive marketing strategies that include social campaign, brand sponsored editorial projects and mobile app design.

For life insurance company Beagle Street for example, the Guardian Lab created a “Happy Life” app that offers mood-boosting tips and ways for users to improve their lives. By asking how users feel about the day, the app can also generate a UK-happiness map. In addition, the Guardian Lab launched a social media campaign to encourage people to share photos that looked like a smile, designed 24-hour phone hotline for readers to ask questions about their unhappiness and produced videos with a well-known psychotherapist with answers.

One of the strengths of the Guardian Lab is to find ways to bridge client needs and editorial interests. The Guardian initiated an investigative series into privacy with support from Silent Circles, an encrypted communications firm. They launch a special business section on sustainability with support from Unilever.

For EE, a UK 4G mobile network, the Guardian Lab created a permanent Guardian Witness mobile app with a prominent “powered by EE” tag. It allows users to directly share videos, pictures, text and ideas with The Guardian’s editorial team, as well as browse contributions submitted by other users. The Guardian’s editorial team can also issue direct assignments and solicit materials for breakings news. The app has won four awards related to journalism, social interaction and innovation.

While Watkins declined to answer questions about revenue, she has said that her sales targets were ambitious. The 2014 figure was tipped to be around £15 million (€21 million). The Guardian has reported a 20 percent increase in digital revenue from £68.3 million (€95 million) to £82.1 million (€114 million) in July 2015, which helped bring down the losses that the publisher has been experiencing in previous years.