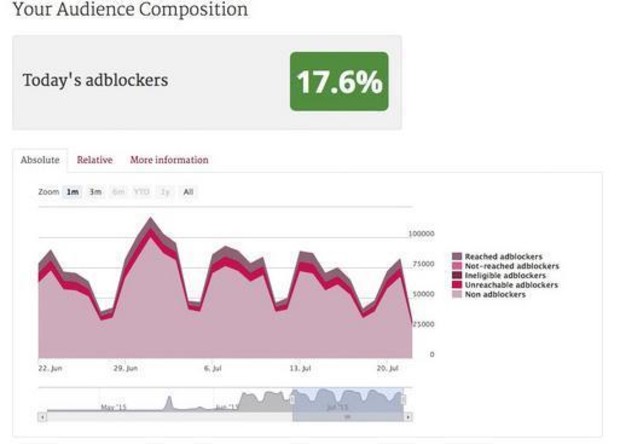 We have also learned from the experience of publishers of all sizes in our network. This article shares three bad strategies that are often attempted by publishers, and a better approach to recovering from adblocking.

Strategy 1: Ask visitors to switch off ad blocking/ask for a donation.

Many sites display notices to visitors who are blocking ads. These notices request the visitor to switch off blocking, or to make a donation to support the sites’ production costs. Technically, this is easy to do, but it is almost wholly ineffective.

PageFair conducted 576 such tests on the web properties of 220 publishers. The result was a total failure.

One third of 1 percent (.33%) responded to the appeals by making an exception for the site in their adblocker’s block list. And of this tiny number a third later removed the exception. The permanent conversion rate was ultimately less than a quarter of 1 percent (.22%).

Having checked our figures with publishers ranging from ComScore 50 leaders to small one-person websites, we are confident that our results were representative of the experience of publishers making the same kind of appeals on their own web properties.

We are aware of rare deviations from our figures. Of these the highest conversion rate was 2 percent, achieved by a non-English language newspaper of very high pedigree. In other words, its audience was likely to be particularly to have a particular affinity to the publication. Even so, the maximum conversion rate was only 2 percent.

We also tested appeals to visitors to make a financial donation to support the publisher. Only three users per million (3/1,000,000) did so.The appeals method netted publishers only $10 per million visitors.

Strategy 2: Prevent visitors from accessing content on your site if they are blocking ads.

Several publishers are currently blocking access to their content to users who are blocking ads. We believe that this is not a solution for the majority of web sites.

Accessing commodity content is not a privilege that users will switch off adblocking for. Many news publishers reprint wire copy and other syndicated content. Even where this is not the case, competitors in the same market often find themselves writing stories that convey the same information about the same topic. This makes blocking access to adblock users a near impossibility.

One has little incentive to switch their blocker off in order to gain access to a news report sourced from Reuters, AP, or another mainstream newswire. They can simply find the same story elsewhere. If a visitor can find some similar version of the blocked content elsewhere with relative ease, the likelihood is that they will simply become a lost user for the blocking site.

However, blocking access may work for publishers who have unique, high value content. A live sports event, for example, is unique, and many (but not all) users will find it hard to find alternative ways to watch the live stream.

This option is dangerous. One can temporarily defeat an adblocker by changing where ads are served from, or how they appear to be referenced in the code of the page. The blocker must update its list of ad definitions with the new location of the ad before it can be blocked again. And so, at least for a short time, the publisher might think that this strategy works. Indeed, inexperienced anti-ad blocking vendors are actively selling this service.

But this is a short term win with grievous long term consequences. This “cat and mouse” or “trench warfare” approach fails to take into account the large community of people who contribute to the ad blocking lists. They contribute their time pro bono for the most part.

Eventually after a period of playing cat and mouse with a publisher the ad blocker community tires of updating the lists with the new locations of every new ad and instead raises the stakes by retaliating with a blanket block of all javascript on the publisher’s site. All javascript.

What that means is that the publisher finds their analytics, advertising, content, and any other features driven by javascript broken. And although the adblocker community will eventually re-enable the core features of the site, the publisher now finds themselves in the bizarre situation that they have to request cooperation from the adblocker community whenever it intends to implement something new on their site.

The first step is to gather intel on the problem

The first step is to understand the level of unrealized revenue that adblocking is causing on your web properties. Not all publishers suffer the same level of ad blocking. The problem is acute for some publishers, and negligible for others. www.PageFair.com provides a free adblocking audit and dashboard for publishers. You will have access to a dashboard that shows ad blocking activity on your site.

Dr. Johnny Ryan Head of Ecosystem at PageFair, and a WAN-IFRA consultant. Previously he was Executive Director of The Innovation Academy, and Chief Innovation Officer of The Irish Times, where he established a multi-million euro Big Data programme, and introduced startups inside the 154 year old newspaper. He has a PhD from the University of Cambridge, and was an associate on the emerging digital environment at the Judge Business School of the University of Cambridge from 2011-14. His second book “A History of the Internet and the Digital Future” is on the reading list at Harvard and Stanfor