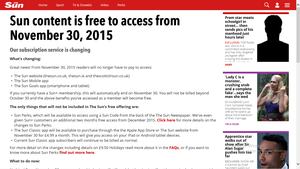 The paywall failed for the British redtop because so much general-interest tabloid news and content is already available for free and shareable online. “Their content isn’t distinctive enough to make you want to pay for it,” says Martin Belam, a British journalist.

High-quality newspapers like the The New York Times and The Financial Times are succeeding to charge for most, or even all of their journalism. But for tabloids, reserving only some of the best articles to subscribers seems to work much better. The German tabloid Bild, the Swedish Aftonbladet and the Danish Ekstra Bladet all use this “freemium” model.

“If a popular tabloid wants to stay popular, which to me is the essence of being a tabloid, you can’t succeed with a paywall like the one The Sun had,” says Poul Madsen, Executive Editor-in-Chief of Danish tabloid Ekstra Bladet.

The decision to drop the paywall on November 30 was announced two months after Rebekah Brooks’ comeback as News UK’s chief executive. In an email to staff she said: “We are in a strong position thanks to the many learnings we bring from the paid-for era. We know more about readers than ever before.”

Selling eyes to advertisers
The Sun‘s new revenue model will be mostly advertising driven. Apart from the successful subscription-based fantasy football game Club Dream Team and the PDF-tablet app, all content will be free. The Sun is hoping this will allow it to grow its digital audience, in order to bring in advertisers. But they’re behind in the game, and the competition for online advertising is fierce. With 2.3 million unique online visitors per day in the UK, the MailOnline has already captured a big chunk of the advertising market.

Before the introduction of Sun+ at £2 per week, it had more than 30 million monthly readers according to The Guardian. Figures from December 2014 showed that 225,000 people subscribed. And after relaxing its paywall, traffic jumped to 1.3 million daily online visitors in August this year. By pulling down its paywall completely, that number should go up.

“I don’t think it’s a case of dropping the paywall and traffic will instantly be turned on like a tap, because they don’t have the social media and SEO presence yet,” says Martin Belam, a British journalist.

Part of the value offered to subscribers was the acquisition of football rights for £30 million, which allowed The Sun to share videos of Premier League football goals within two minutes of them being scored. However, this did not yield the promised results, due partly to social sharing of the goals on Vine.

Sharing is crucial
Goals aside, the stories that are behind a paywall don’t get as many shares on social media, and that alone causes a huge loss of readers. “The incentive to share isn’t there, because you know your friends aren’t going to be able to read it,” says Belam. A study by Parse.ly last week showed that social media, rather than search engines, drove “a large and growing number of traffic to news stories in 2015.”

Since taking the decision to change its revenue model, The Sun began lowering its paywall to increase the number of shareable stories. These “free” stories were mainly those expected to generate a lot of traffic; for example, its controversial article ‘1 in 5 Brit Muslims’ sympathy for jihadis’ published last week. For Sun+ customers, who were being billed to access online content, there seemed few perks left.

The Sun‘s management team is confident that its new digital approach will yield results. Tony Gallagher, The Sun ‘s editor-in-chief told staff there were many new digital developments in progress. “Whether it be Apple News, Facebook Instant Articles or the success of Club Dream Team, we are pushing ahead with lots of exciting projects that will help us grow our voice in the digital sphere. In addition to these, from November 30 we will have one uniform online presence – on website, tablet and smartphone. There will no longer be separate smartphone or tablet apps, although the ‘classic’ PDF app will be retained.”

SunNation: A political voice
In the UK context, offering content for free is also crucial if you are to maintain a strong political voice in the national conversation. The Sun recognised this and so, during the British general election, in May this year it launched SunNation, a stand-alone website for election-related content that was free for all.

“They launched it too late, but the experiment built presence,” says Belam, who was working for rival newspaper The Mirror Online at the time. “We were hugely impressed by their coverage.”