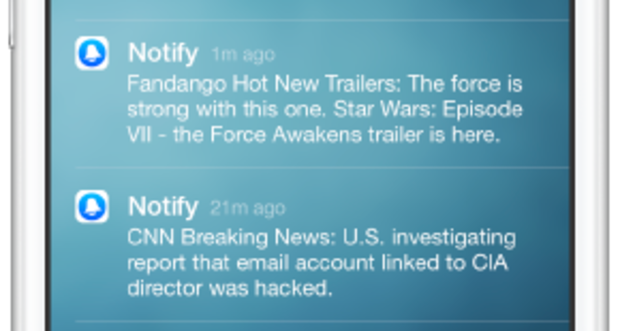 Facebook finally officially launched the Notify app for iPhone. Its main purpose is to push notifications from selected news sources to the homescreen of your phone, in order to, as the official press release poetically states, deliver timely notifications about the things that matter to you, from the sources you love, all in one place. This can include, again according to the press release, The Final Scores station from FOX Sports, Hot New Trailers from Fandango, Breaking News from CNN or The 10 Best Dressed station from Vogue, and, to wrap things up, bite-sized guided meditation exercises from Headspace. What’s not to like?

I’m not going to dive in detail into the functionality of the app, (you can read more about the announcement and the product details here, here and here). Suffice it to say that Facebook has signed up about 75 content providers – or sources in their parlance – and that you can customise what you want to receive from each “source” with some granularity.

On paper (no pun intended) this makes Notify look like a strange mix of Twitter and a news aggregator à la Apple News, albeit one that has decided to push 100-character snippets of news all the way to your home screen.

As long as you stick with the official narrative, this could look interesting to some extent; in practice, things are a little bit more muted.

Notfiy’s sources of contentFirst there is the content: While many big names, from Buzzfeed to the New York Times, Quartz, Time and even Vogue seem to have signed up for Notify, the content they provide is, at least at this point, much more geared to leisure and entertainment than to serious news collection.

Take the New York Times: while on Apple News it provides all of its popular Morning Briefing, it only sends selected snippets of its content to Notify (“Read of the day”, as well as a handful of sections such as Innovation and Cooking.) And even purely digital news providers such as Buzzfeed or Quartz only provide a relatively small selection of sections one can choose from.

Once you have set up your preferences, news notifications get automatically pushed to the home screen and notification area of your iPhone. You can of course switch notifications off – in which case you can still consult the list of notification inside the Notify app, where it is presented in Twitter-like timeline, but without any illustrations, which makes cruising the news a rather dull experience. Tapping a news item displays the publisher’s web page using the built-in rendering engine (by-passing ad blockers, in case you were wondering.)

A lot has been made of Notify being an attempt by Facebook to compete with Twitter, by providing a customisable stream of breaking news items. But while Notify tries to provide breaking news in a timely fashion, it lacks the diversity, the sense of urgency and dedication that makes Twitter the essential news-exploration tool it is. If Notify is intended as a Twitter competitor, it is not a very convincing one, nor does it hold up terribly well in comparison with Apple News in terms of content and flexibility.

Snapchate Discover’s sourcesIn fact, it is much more likely that Facebook is going after Snapchat here: the millennials audience is one where Facebook use is in marked decline. Notify’s “Sources” have more than a passing resemblance to Snapchat’s wildly popular Discover feature – but most importantly, the concept of a constant notification stream is likely to resonate much more with a millennial audience than with older users. And just like Snapchat Discover, Notify is designed to entertain through tidbits of information rather than to serve as a heavy-duty news collection tool.

But all that, I think, may well be besides the point.

In fact, it seems quite obvious (at least to this observer) that considering Notify as a full-blown attempt to compete with the other players in the news aggregation field would be a mistake. Notify is not an app that is looking for users, but rather a well-disguised attempt to better understand and to collect data on a market that Facebook wants to control. Whether Notify will fail or develop a following is definitely not what this is about: rather, it gives us a glimpse on future directions of news integration in the core Facebook app, and how the company is attempting to gain a better foothold with a younger audience than the 40+ average Facebook user.

What does Notify mean for publishers?

Truth be told, it is hard to see how Notify could rapidly become a strong force in the distributed content landscape: Sure, putting your content up on Notify will drive some traffic – the question will be how much. The app literally starts from zero, and does not directly benefit from the Facebook user base, so even if it were to suddenly catch fire, it will be some time before it has a significant user base. By comparison, Apple’s news app had at least the advantage of being pre-installed with iOS 9; Facebook, on the other hand, needs to motivate users to download and configure the app, and then to go on using it on a permanent basis. All of which are pretty serious roadblocks, as most app developers have painfully found out…

So, to sum things up: yes, Facebook Notify is interesting, but not for what it is – but for what it tells us about Facebook’s intentions in the content market. And that is decidedly something that publishers need to watch…

After 10 years at the helm of a leading European technology magazine, Andreas Pfeiffer founded Pfeiffer Consulting in 1998, with the aim to provide market-specific research and consulting to media producers and technology providers. Through his site Pfeiffer Report he offers in-depth analysis of emerging media, publishing and technology trends. Pfeiffer is a frequent speaker at international events for the publishing and media community, and his insights have been quoted in newspapers and magazines such as the New York Times, the International Herald Tribune and Wired.” @pfeifferreport