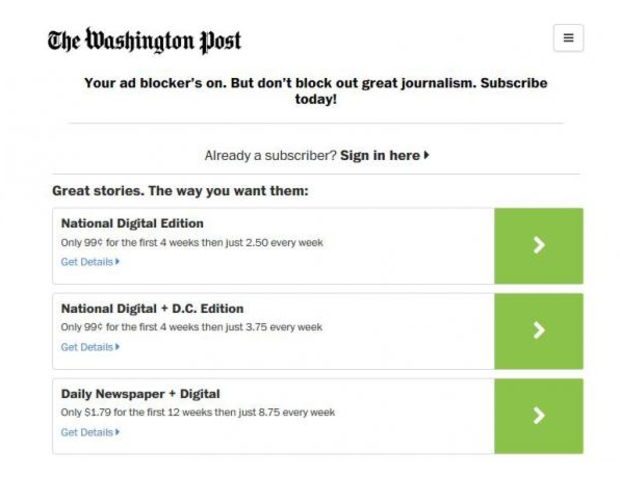 Here are some learnings:

The Washington Post constitutes the most high profile example in this category. In early September, the publisher started testing blocking content access for users with ad blockers enabled, with a box popping up encouraging users to become paying subscribers, according to AdAge.

Axel Springer owned Bild are showing users with ad blockers the message “With Ad blocking activated, you can no longer visit Bild.de.” The user can then click either “Deactivate ad blocker now” or “Subscribe to BILDsmart.”

According to an article in the Financial Times on 4 November, Axel Springer CEO Mathias Döpfner, in a conference call with reporters, stated that in the month since the anti-ad blocking measure had been in place, the proportion of readers using ad blockers when accessing the Bild website had dropped from 23 percent to a “single-digit” when they were forced to choose between switching off the software or paying for a subscription. The majority of users opted to switch off the ad blocker.

Ask visitors to switch off ad blocking/ask for a donation

Many sites display request notices to visitors who are blocking ads, asking the user to switch off blocking, or to make a donation to support the sites’ production costs.

This approach has so far not proven effective. PageFair conducted 576 such tests on the web properties of 220 publishers. One-third of 1 percent (.33%) responded to the appeals by making an exception for the site in their adblocker’s block list. And of this tiny number a third later removed the exception. The permanent conversion rate was ultimately less than a quarter of 1 percent (.22%).

There are a number of tech suppliers in the market providing solutions, which in effect disable the ad blocking software, letting advertising through.

There are two categories of companies here. The first one is PageFair’s technology, which creates an un-blockable route to serve respectful ads. ”This works, is patent pending, and is the result of five years of work by the people who conceived and delivered the technology that enables massive multiplayer games like Call of Duty and Guitar Hero,” says Dr Johnny Ryan of PageFair.

The second category are the many anti-adblock companies that try to change where ads appear to be served from. Says Ryan: “This ‘cat and mouse’ or ‘trench warfare’ approach fails to take into account the large community of people who contribute to the ad blocking lists. They contribute their time pro bono for the most part. Eventually after a period of playing cat and mouse with a publisher the ad blocker community tires of updating the lists with the new locations of every new ad and instead raises the stakes by retaliating with a blanket block of all javascript on the publisher’s site. All javascript. What that means is that the publisher finds their analytics, advertising, content, and any other features driven by javascript broken.”

One other option, currently considered by The Guardian, as reported in Digiday, is to, in some way, “put the user in control” of their advertising experience. However the publisher has yet to take concrete steps to achieve this vision.

The good news for publishers is that they have a direct relationship with consumers, and the opportunity to build on this. There’s also an opportunity for publishers to get in the driver’s seat in relation to advertising. Much of the current issues with slow loading times and intrusive ad formats are due to the complex ad ecosystem and all the third parties.

Some publishers are already dealing directly with brands around branded content campaigns. Branded content provides a better experience for users and improved engagement for brands and will no doubt increase in popularity as ad blocking increases and display declines.