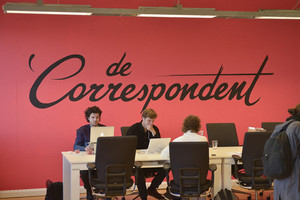 The support for a new transparent, interactive advertising-free form of journalism was overwhelming when De Correspondent launched on September 30th, 2013. Crowd-funded contributions from nearly 20,000 members gave the Dutch news site a kick start of €1,6 million ($1.7 million).

It launched with just 13 journalists. This year there will be 31 at the Christmas dinner table.

A knowledge-driven community
The team aspires to be a journalist-led Wikipedia. Some 92% of its online knowledge-driven community is highly-educated and mostly between 25 and 34 years old. The focus is on interaction between its members and the correspondents, who are considered discussion leaders. At De Correspondent, almost every story starts with a call to members, unlike traditional publications, where readers tend to come into the picture when the story is already finished.

“We think it’s a journalists’ responsibility to make use the knowledge of their readers,” Ernst-Jan Pfauth, co-founder of De Correspondent

In February this year, the health correspondent called on members to share their experiences of bureaucracy in the Dutch health system. More than a hundred responses were received within two weeks. Among them were physicians’ complaints about insurance companies overloading them with unnecessary administrative tasks. The in-depth information and day-to-day struggles generated from members, combined with journalistic expertise, led to a series of articles putting the situation into context.

Transparency to its paying members
The personal connection with subscribers is what makes De Correspondent a very transparent medium. Whereas many media outlets act more or less like institutions, this publication has a two-way communication approach; members can talk to the correspondents and provide them with sources and story ideas. The members, who funded this publication, are free to share articles with whoever they wish.

This transparency is also apparent in the way they run their business. Every summer it releases an annual report, showing how the membership money is being invested. “We exist because of our members, that’s why we are transparent,” says Ernst-Jan Pfauth.

It works in the Netherlands, will it work elsewhere?
Although most content is in Dutch, De Correspondent is starting to translate some of it into English. Many stories are relevant to a wider, perhaps even global audience. For example, this piece on online security concerns which may make you stop connecting to an insecure public WiFi network without taking security measures (if you weren’t doing that already).

With enough interest from the English-speaking ‘crowd’, the knowledge-driven community could open up membership to the world. “If we reach more people, we will also have access to more sources which will further improve our journalism,” Ernst-Jan Pfauth. These are still just hopes for the future. For now, more English stories will be made available through the weekly newsletter.