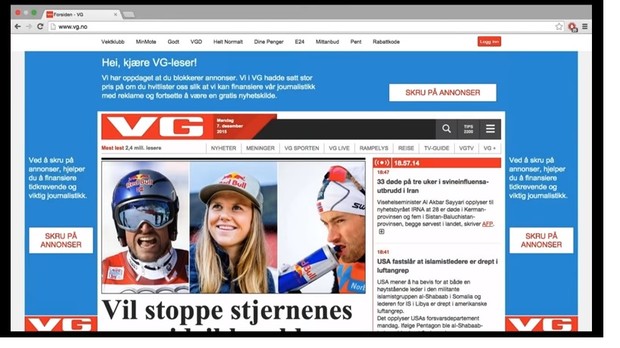 Caption for above image: When ad-blocking users visited the VG home page, the blocked ad units displayed a message alerting users that ad revenue finances VG’s journalism. There is also a button to restore ad display.

A Commercial Product Manager for Schibsted’s Norwegian media group, Verdens Gang (VG), Esmailzadeh and her colleagues have been monitoring the rise of ad blocking long before it became a mainstream topic, and consequently, they have collected extensive research on their ad blockers.

As the featured speaker of WAN-IFRA’s webinar on Positive Approaches to Ad Blocking for Publishers (click to replay the webinar) on 17 December, Esmailzadeh described the strategies VG has implemented to reduce ad blocking.

Start a dialogue with your readers

Esmailzadeh discussed the actions VG took to engage with its ad-blocking users, and this began with issuing detailed surveys directly to the ad blockers when they visited the site.

The ad-blocking user was first prompted to simply answer: Why are you using ad blockers? This survey initiative gave VG their first opportunity to convert ad blockers by emphasising that the advertising revenue generated from the website finances their journalism.

Accompanied with this reminder, was an Internet browser-specific guide for the user on “how to whitelist.” This initiative, alone, decreased the overall amount of ad blockers to the site from 18% to 14%.

While this method to educate users was very successful, VG knew they would have to take further action to properly deduce why the remaining users were unwilling to whitelist their page and their reluctance to eliminate the use of ad blockers.

Identify your ad blockers and their motivation for blocking ads

Verdens Gang’s next action required them to focus on the approximately 25,000 remaining ad blockers, to whom they sent out another survey seeking to identify who represented the typical VG ad blocker.

The results determined that an overwhelming percentage were younger males aged 18-29. As Esmailzadeh stated during the webinar, this discovery was significant as the majority represented VG’s future audience.

The successive surveys were targeted to tackle ad-blocker user objections and also to glean insights on how to improve the user experience.

Optimising the user experience for your whole audience

The survey feedback galvanised company change and this included addressing their most popular ad-blocker user’s grievance: site load time. Many internal departments cooperated together to reduce site load time, and the launch of lazy loading will take place in 2016.

The image at left illustrates the download time with 3G speed and the right image depicts the new, faster download speed with the launch of lazy loading.

Verdens Gang also began an initiative to address the recurring user complaint of “annoying ads” and started a dialogue with media agencies and their customers to improve advertisement quality. Presently, rules and guidelines are in place for January 2016 on creating useful, non-tracking and static ads for consumers to benefit all parties: publisher, customer and user.

Esmailzadeh said Verdens Gang remains committed to combating ad blockers, and this led to their involvement in roundtable discussions with Norwegian competitors. They view this as an industry-wide problem that needs to be addressed with a unified stance for publishers: if one decides to block their site to ad blockers then the rest will follow suit. The discussions will also be ongoing action points for 2016.

Join our discussion on ad blocking by signing up for WAN-IFRA’s Ad Blocking Action Day our 1-day event in Frankfurt at the Frankfurt Allgemeine Zeitung on 11 February 2016, where we will focus on two core topics for publishers:

1) What actions are being taken to improve your user’s experience?

2) What steps can you take to win back readers who are actively blocking?

To find out more about our Ad Blocking Action Day, click here