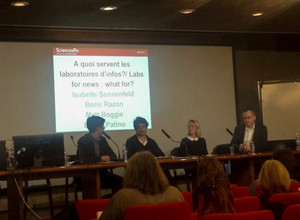 1. Data-informed vs data-driven
The good old page view is irritating a lot of publishers, who blame the metric for the poor quality of online journalism says Chris Moran, Audience Editor at The Guardian. But page views can teach you a lot: for example how to find audiences, the importance of Google for live news and how ‘the myth that people only want crap on the internet isn’t true’. Moran notes that everyone is talking about a metric to measure impact, but what does impact actually mean? And why do we want to measure it? Is it so that we can feel good about the quality of our journalism?

Being data-informed rather than data-led seems to be the way forward. “You cannot learn if you don’t get data back,” says Renée Kaplan, Head of Audience Engagement at The Financial Times. Kaplan confirms being data-informed is essential for a paid-for publication like FT. For BuzzFeed, it’s another story. At least 75% of their traffic comes from social media. “Data is at the heart of BuzzFeed,” says Cécile Dehesdin, Chief Editor of the French division.

The use of data in the newsroom has changed reporters’ behaviors according to Caitlin Petre, Research Fellow at Columbia University’s Tow Center for Digital Journalism, who found out that metrics are very powerful: “They engender strong emotions, they’re highly addictive and they intensify internal competition,” she says. The full research report called The Traffic Factories is available here:http://towcenter.org/research/traffic-factories/

2. ‘News Labs’ are up-and-coming
More and more companies are setting up a so-called ‘News Lab’. “It’s not something that is happening every week, but it definitely happens every month,” says Isabel Sonnenfeld who leads the Google News Lab. Her team of 15 to 17 people consists of mostly journalists, whilst The New York Times R&D Lab’s seven members are all engineers with backgrounds in software and gaming. Led by Matt Boggie, the NYT lab is currently investigating areas including data privacy, connected objects, the relationship between reader and reporter, personal and contextual interfaces, the collaboration between reporters and robots, and the rise and evolution of platforms.

3. The Do’s and Don’ts of Snapchat Discover
Seventeen media companies are already using Snapchat Discover, the new Snapchat feature that enables publishers to reach teenagers through the video messaging service, launched in January this year. The way people consume news is changing very quickly says Jackie Goldstein, Editorial Operations Director of Vox Media. “We are not sure if people will have their (audio) volume on in three months time, so we make sure all videos are still engaging without audio.”

CNN found that their Snapchat audience is interested in news and analysis. “They don’t just want celebrity stories. Topics such as climate change, race and gender equality resonate with the younger audience,” said Samantha Barry, CNN’s Strategy Director. The way content is communicated is also crucial, “we shouldn’t talk down to the younger reader,” she says.

Using Snapchat, all panelists feel that they are playing in someone else’s playground. “They can kick us out any moment, but they also need our content,” said Barry. More importantly, there is a need to ask something back: DATA.