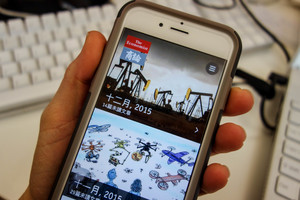 First of all, it is still available, unlike other Chinese language products offered by other western publications. “Most of them are blocked,” Charlie Smith [a pseudonym] told us. He is an activist who co-founded Greatfire.org, a site created to highlight state censorship. ProPublica, an investigative journalism website used its data to monitor 18 international news and social media sites on a daily basis; on average, more than half of those are blocked.

Tim Pinnegar, The Economist’s Asia Pacific Managing Director, told us that the GBR-app had 350,000 downloads in the first six months. Eighty-five percent came from China and more than 700 became paying members, spending approximately $6 a month, or a discounted $60 per year.

The app’s 30 articles a month include only business, finance and technology stories from the magazine, rather than more sensitive, political stories. There’s no trace of any content related to China’s leaders, corruption, press freedom or human rights. The Economist‘s full app has about 300 articles per month.

“Chinese people want to hear about our view of the world, not necessarily our view of China,” said Pinnegar, emphasizing that their research found that those three sections gained most interest. Sidestepping censorship? “No, we are not going to self-censor,” he told us.

Censorship: the biggest hurdle
Not getting blocked is the number one challenge for media companies who wish to go into the Chinese market. The New York Times Chinese’ website was steadily gaining readership until December 2012 when it published an article on the wealth of the Chinese Prime Minister’s family. It won a Pulitzer Prize for the story, but the website was blocked right afterward, and it still is today.

“The articles that get us into trouble, are exactly the kind that people want to read,” Craig Smith, Managing Director of the New York Times in China, told us. “Commercially, it has been difficult. But in terms of reputation, and our brand, it has been a huge positive; people trust that we will not censor ourselves.”

In 2014, Bloomberg withheld an investigative piece out of fear of being “kicked out of China”. It was planned right after publication of another sensitive article on Chinese premier Xi Jinping, which has led to a slowdown of its terminal sales, blocking of the website, and denials of journalists’ visas. Bloomberg‘s Chinese website is also still blocked today.

The Financial Times, an early entrant launched in 2005, is one of the few foreign news sources that is available. It claims to have nearly two million registered Chinese users. Charlie Smith from Greatfire.org explained it is because the site is unencrypted, which means censors can selectively block articles that they do not want to be distributed while keeping the rest online.

The importance of brand awareness in China
Besides censorship, brand recognition is an issue, as China has nearly 2,000 print titles and 12,000 digital titles. It is hard for foreign publications to get local advertisers. “It is not the first place brands would choose to advertise,” said Vicky Lam, an online advertising specialist based in Hong Kong. “The media brands need to make themselves known to the Chinese public first.”

Besides that, bureaucrat-turned-entrepreneur Jing Zhang told us that local media can often offer more in-depth coverage, because Chinese nationals aren’t allowed formal bylines in foreign publications. This limits its ability to tap into local talent and produce stories that readers most care about.

While the GBR-app has attracted global sponsors such as Hyundai and HSBC, Pinnegar admitted that “people still don’t know us in China” and that a lot of effort is made to get the Chinese familiar with the brand, for example through advertising and partnerships with business schools.

The New York Times finds alternative ways to reach Chinese readers in China, whilst their website is blocked; for example through social media and email newsletters. But also, through a print magazine it distributes at the airport and certain hotels in Hong Kong. It also offers a Chinese language travel guide of New York City as a supplement to the largest Chinese-language newspaper in the US, The World Journal.

Why would western media still want to go into China?
Simply, it is the world’s largest economy, and salaries are rising rapidly, attracting brands across all sectors. China is now the world’s third largest advertising market, and that figure will likely double in 2016.

“They are banking on the fact that as China gets stronger, it will open up in the long term, and break the firewall on the Internet,” said CK Lau, a principal lecturer at Hong Kong Baptist University and former editor at South China Morning Post. “But how long it’s going to take, we don’t know.”

For now, all eyes are on the new generation. “A lot of brands are looking for those ‘up-and-coming’ people in China, but they are extremely hard to find,” said Pinnegar, who believes that this target group is progressive and appreciates good content. The GBR-app’s current audience is aged between 25 and 35, of which 65 percent are male.

Even though the Chinese New York Times is blocked, Craig Smith told us that hundreds of thousands of Chinese are still coming to the website by circumventing the block through virtual private networks or technological manipulations. He did not disclose exact figures but based on a survey of 1,500 readers last year, its readership is mostly male, has a medium age of 33, and more than half has college degrees.