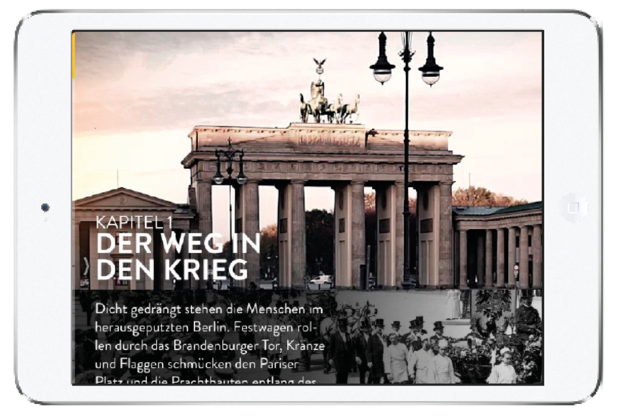 In this excerpt from our forthcoming report about all of the World Digital Media Award winners, WAN-IFRA contributing writer Steve Shipside describes how Axel Springer, one of Europe’s leading news publishers – and one with a strong culture of innovation, produced EPOS.

The company teamed up with Sprylab and its Purple Publishing Suite of tools, which enabled the editors to create their immersive history tales without the need for programming.

With the choice of the First World War as the subject for the first edition of the application the team from Axel Springer also collaborated with the Deutsches Historisches Museum (German Historical Museum) to edit video footage that had never before been seen.

EPOS aimed to use all the power of multimedia to allow readers to dive into the story of the First World War with the videos, animations, and interactive elements integrated into the reading process rather than bolted on with push buttons to for activation.

The idea was that they would begin playing as the reader reached that point in the narrative. The reader reads at their own speed, and the rich media elements come into play automatically at the appropriate moment.

Hans Evert explains how the EPOS app came about:

“Back in 2012 there was a lot of interest in immersive storytelling with things like [the NYT’s] Snow Fall, and so on, and we were thinking that’s great, but we don’t see this kind of immersive content being funded just by adverts. We felt that it called for a paid content approach, which meant finding a topic people were prepared to pay for.

“We did some research and interviewed the print magazine market and found that in Germany all the publishers are in crisis mode, but some magazine titles are still performing very well. Notable amongst these were the history magazines.

“We thought that there is an audience willing to pay for it – not least since print magazines are high cost items with some costing up to 10 euros a copy. Which means that if you can deliver high quality content then you have a chance of finding an audience. With history proving so popular, and the anniversary of World War I looming, it was the natural topic to start with.”

Which is how the first issue of EPOS, “When Europe committed suicide” came into being.

The goal was to take the best of new forms of journalistic storytelling, and deliver stories in a way that would appeal to a high-end consumer. On the way, it was also essential that the interface should be as intuitive as possible and that interactive elements should complement, not interrupt the narrative.

“It is a completely new digital magazine product. Yes, we were looking at the multimedia stories coming out of The New York Times and the Guardian with NSA Decoded, and we analysed their features, but the concept of EPOS is that it’s all about reading on the one hand, but where the reading is the focus and the multimedia elements have to be simple and convenient. If you start scrolling, everything appears automatically with no tapping as you go. Even my mother finds it very appealing, which is amazing considering her attitude to technical devices.”

EPOS was implemented using the Purple Publishing Suite, during a three month production phase that saw the software turned into a kind of content container so that all the interactive elements are integrated and subsequent issues of EPOS require the new content to be dropped into the container but no further programming is needed.

This was not a project driven by profit margin. It was always more of a proof of concept and Evert sees the goals and results as falling into two categories; the product’s reception from readers, and the learning points for the team.

“The first thing is that it was really enjoyable,” Evert says. “It was demanding, of course, because we had a very small team consisting of myself, the Editor, Julieta Romero, and the Art Director, Oliver Polich. I’m a print journalist, so I know how to handle text, but for EPOS, we had to tell a story with so much more. And the experience of infographics and videos broadened my personal horizons, and I think those of everyone in the team.

“What we learned, and are still in the process of implementing across the whole [Axel Springer] group, is storytelling is not just about the text,” Evert adds. “That may sound obvious, but we have a big print legacy and with that a focus on the text first with photographs as an addition. Now, we have to understand storytelling in a much broader sense and that was a huge learning from EPOS.”

In addition to contributing to internal cultural change, EPOS proved its point about the possibilities of new paying audiences.

“The reaction of the audience was also amazing. In the edition about First World War, for example, we had a chapter about the assassination of Franz Ferdinand in Sarajevo. We made a map of old Sarajevo, and as you read the narrative, you got an animation of the route being driven and the point where the assassination took place. A lot of feedback described it as an amazing experience to be able to consume the story in that new way,” says Hans Evert.

“There was a lot of interest in EPOS as a model for educational material and even a blueprint for modern schoolbooks as a way of explaining and understanding facts,” Evert says.

Perhaps even more importantly from the point of view of a publishing house, EPOS demonstrated a new market for content. “It showed that if you want to get paid for content, then you need to focus on quality and a good user experience. In the digital era, people are still willing to pay, but you have to show them that you have the quality and the product is worth it,” Evert says.

See a brief video about the EPOS app here.