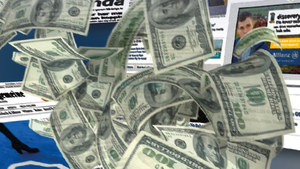 For centuries, the business model of general-interest newspapers and other mass media was based largely on aggregating audiences and then selling those audiences to advertisers.

Then came the World Wide Web, which tempted businesses to try to aggregate audiences without the aid of media companies – to cut out the middleman and market themselves directly. In theory, all a businessperson needs is some website design software, a hosting arrangement with a provider, and a few social-media accounts.

In reality, of course, aggregating an audience on the internet – and monetizing that audience – has become a complex undertaking, requiring resources and expertise that most businesses, especially small and medium-sized ones (SMBs), do not have.

Out of that opportunity was born a new type of media business, known variously as a digital marketing agency, digital advertising agency, or digital services agency. Such an agency might offer some or all of these services:

In the USA, newspapers both large and small have been quick to create, acquire, and/or partner with digital agencies. One motivation has been a desire to compete with Google, which started offering agency services some time ago, said Ben Shaw, Director of Global Advisory at WAN-IFRA and former Chief Digital Officer at Shaw Media in the U.S. Midwest.

Also, he said, “All newspapers have been doing a lot of typically agency services for a long time – designing ads for people… Then we have these great relationships with [business]people.” He continued, “We also need a way to get new customers that aren’t just our paper customers or just our website customers. So one of the things that is complementary to selling ads is to offer agency services.”

The starting point, said Shaw, is website design, which he called a “pretty easy sell,” because most businesspeople are dissatisfied with their sites and see a need to improve them. Also, even the best-designed banner ad on the best-executed newspaper website cannot do its job if the advertiser’s site is found to be completely useless by the people who click through to it.

Like many newspaper companies, Shaw Media does not have extensive digital marketing expertise in-house, but rather outsources most services to third-party providers. Shaw said in the early days of the web, some newspapers tried to provide services in-house, but soon found that they should focus instead on their core mission of providing news and information. Selling digital services – via a dedicated sales force – is an attractive proposition, but fulfilling them is generally better suited to outsourcing on a revenue-sharing basis, they found.

In the USA there are many third-party providers, some of them associated with large newspaper groups. In fact, a large and complex ecosystem of these so-called “white label” service providers has emerged. A newspaper might contract with one or more of those providers to market their services locally under its own brand name, while handling some types of services in-house. To complicate the matter yet further, there are even partnerships among some of the providers.

Some providers specialize in certain areas, or take different approaches to services. For instance, OwnLocal, a Texas-based company (and WAN-IFRA member), uses the information contained in print ads as a starting point for digital marketing campaigns for local advertisers. It markets itself as a turnkey provider to local and regional newspapers. (See our interview with one of the company’s co-founders.)

While offering a range of agency services currently is largely a U.S.-based phenomenon (with some examples in Canada and Australia), the trend will soon catch on in Europe, Shaw predicted. The reason: falling revenue from traditional advertising.

“Overall marketing spend is growing, but the share of the overall marketing spend that display [advertising] gets is shrinking, and there is going to be more money – there already is more money, but there is going to be even more – in agency services. If you’re only selling display advertising, then you’re fighting harder for something that’s shrinking and shrinking,” said Shaw.

In his June 2015 report, “Local Advertising Hits a Tipping Point,” U.S. local-advertising expert Gordon Borrell of Borrell Associates wrote, “82% of SMBs have established their own media channel in the form of a website or social media page. We’ve found that 72% of them are purchasing digital services to support those channels, spending far more on those efforts than on basic advertising.” The findings come from a survey of 7,228 SMBs in the USA.

The report continues, “We are witnessing the dawn of the Golden Age of Geomarketing. It’s a complicated environment, but the good news is that millions of local businesses are in need of marketing leadership. Their digital savviness is lacking […], and they yearn for someone with a marketing plan that makes sense of it all.”