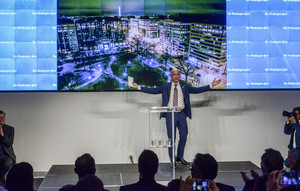 At a live-streamed ceremony to mark the opening, The Washington Post CEO and Publisher Fred Ryan said the new building was not designed for 2016 – but should see the Post as far forward into the future as possible – ideally into the 22nd Century.

The 24/7 news hub accommodates more than 20 people, and it is ringed by more than 20 monitors showing Post video, major news channels and Post metrics  – some no doubt will be displaying the analytics which show The Washington Post’s remarkable 78% rise in digital readership over the past year. Some 40% of those readers are in the 18-35 age bracket.

To accommodate dozens of live media interviews per day, the newsroom also features 4 liveshots – a newsroom set and three additional cameras throughout the two floors. Reporters can also conduct radio interviews in one of two radio studios, in addition to a sound recording booth. The Washington Post Live Center on the 4th floor is the ideal location for high-end events, sit-down dinners, panel discussions and galas.

Publisher Ryan said the Post had moved from a building that was designed five decades ago with the goal of supporting a great newspaper. “History was made in that building. Today, we are operating in new headquarters for an enterprise that has evolved to become a media and technology company.”

He spoke of the unprecedented speed of change now facing publishers: “Journalism today is a high velocity endeavor, not a profession for the feint hearted.”

Editor Marty Baron picked up the theme: “the only thing we can be sure of is change and change will come fast. Innovation is at the front and center of the newsroom. Dozens of engineers are now embedded in the newsroom, not only to make the web faster, but finding a way to get content to eyeballs.”

Today’s readers do not want to look for news, they want it to find them. So the social media revolution demands a big move made to get news out on smartphones.

Owner Jeff Bezos said he was a huge fan of “leaning into the future – the future is always coming.” So he had passed up the opportunity to buy the old building on 15th Street. “There was a lot of nostalgia and history in that place, but it was better to move… Too much glamorizing of the past can be paralyzing.”

Bezos said he did not want everything to change, the soul of the paper had to remain. “There is very obviously something special about the attitude, the culture, the heart and soul of the Post. People are missionaries.” He felt the Post was a little more swashbuckling, it had a swagger and “badassness” about it. “That is pretty special, but without its quality journalism, that could lead to epic failures.”