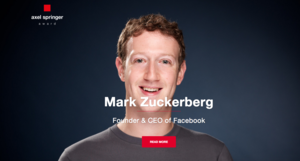 Mark Zuckerberg, its first-ever recipient, was selected for “creating the most significant communication medium in a generation,” according to a press release. The award does not provide any money or trophy.

Observers were not so sure.

“I wonder whether Axel Springer is genuinely embracing big Internet players or whether they are taking a stand with Facebook in the war against Google,” said Elena Perotti, Public Affairs Officer for WAN-IFRA, referring to years of legal fights with technology giant Google.

In 2014, Axel Springer joined the “Open Internet Project”, a European anti-trust action to complain about Google’s monopolistic practices. It has also tried to force Google to pay for copyright on the snippets of its articles that shows up on Google search, but backed off after seeing traffic plummet when Google removed the pieces.

Earlier this year, VG Media, a consortium that Axel Springer belongs to, filed another complaint against Google in a row over whether or not the search engine should pay publishers to show their articles online, according to Reuters.

Axel Springer is also actively pursuing ad blockers. While it has unsuccessfully sued the largest ad blocking company, AdBlock Plus, last year, it now requires its readers to pay an additional fee if they do not disable ad blockers on BILD, one of the largest tabloids in Europe under Axel Springer.

In a public letter sent to Eric Schmidt, CEO of Google, in 2014, Axel Springer’s CEO Mathias Döpfner criticized the European Commission for allowing Google to build a ‘digital supra-state’. He also mentioned problems created by other technological giants, such as Facebook and Amazon. In addition, he expressed concerns about Zuckerberg’s views on privacy.

With the ever-expanding popularity of social media, publications have become almost completely dependent on them for distribution. Attracting more than 20 minutes a day from 1.44 billion active users, Facebook has surpassed Google as the top referral source for digital publishers and is continuing to grow.

“As a media company, our audience is progressively migrating towards third party platforms such as Facebook,” Jean-Charles Falloux, Managing Director, Digital Media & Tech Innovation of the French publication Les Echos, told the World Editors Forum. “That’s why we are trying Instant Articles, Facebook is a tremendous ecosystem that we need to tame.”