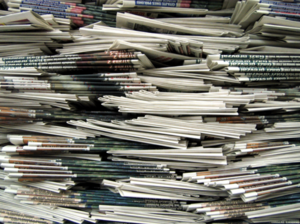 The news is not good: as the Financial Times detailed in a recent article, newspapers in the UK –one of the most thriving markets in terms of newspaper consumption – are facing a dour outlook. And even if you look at digital publishing, growth is increasingly hard to finance, as the Columbia Journalism Review recently documented. And while it would be wrong to put all the blame on social media distribution, it is clear that it plays an important role in the continuing decline of newspaper revenue.

What was only a relatively vague rumbling a year ago is quickly turning into the new normal: social platforms are replacing the open web as the preferred way of accessing mobile published content.

Whether you call it distributed content, platform publishing, homeless publishing or whatever other moniker may be floating around on the web: mobile social platforms of every ilk are now dominating mobile news, and once publishers will have ramped up support for Google AMP (Accelerated Mobile Pages), there will be even less reason for users to visit publishers websites.

This is probably not good news for publishers, excepted perhaps the lucky ones that can still hope to fund their survival in this difficult game through venture capital.

There are some positive signs, of course: Ad-tech vendors are scrambling to support the new platforms (which in the process reduces the risk of adblockers), and Google AMP will even support paywalls for mobile content, which none of the other distributed content offerings do, at least for the time being.

But let’s face it: we are witnessing a process that increasingly strips publishers of ways to build a meaningful brand presence – which in turn means that it has become significantly more difficult to build loyal audience, and, hopefully, return customers.

Going after every available social channel to distribute content the way BuzzFeed does is probably a smart move for some publishers – but the BuzzFeed way of doing news certainly does not apply to every publishing venture in existence. Quite far from it, actually.

Between a rock and a hard place

For many publishers out there, the only mission statement in place these days seems to be: Survival. And to be fair, to jump off the conveyer belt of history that threatens to be carting many traditional publishing businesses into the trash-pile of oblivion seems an almost impossible task, especially for smaller publishers.

These days, a seemingly unlimited supply of intelligence, creativity, data analysis – and of course, money – is pumped into trying to predict the next twist and turn on the road to distributing more and more content to more and more people in a more and more efficient and speedy way. This, we are told, is all that matters. This, in short, is the future of media: Do your best to keep up – and woe to those who don’t run fast enough, or run out of money on the way to ephemeral digital media mastery. And forget about the rest.

As someone old enough to have seen a newspaper being put together from bits of lead, I favour a somewhat longer view on technological evolutions in general – and publishing in particular. Not out of some ill-advised, sentimental longing for a past that’s too far away to be evaluated objectively, but rather because, having been around a while, I have seen a fair share of exciting technology developments raise sky-high expectations – and fizzle away unceremoniously a few years after. Remember AOL?

It may seem like a dangerous luxury to attempt a more detached view in the middle of a tornado: Technology is evolving at breakneck speed; just keeping up with what’s going on seems an almost impossible task. Yet taking a slightly more distanced view may allow us to spot in which direction the aforementioned tornado is moving – rather than just trying to avoid the next airborne cow that is being projected in our direction. When survival is at stake, all that counts is not dying it would seem; yet, to stick with the (admittedly slightly lopsided) tornado metaphor for a moment, staying alive is not necessarily linked to outrunning the motion that is in place, but to finding a way to a more stable base.

With all this in mind, let’s take a long, hard look at publishing today.

OK, I’ll plead guilty to the charge of over-simplification, yet the picture I am presenting is not too far removed from a certain reality, and what disturbs me with this picture is that it sidelines or disregards a few, very basic facts about the world we live in – facts that, however, should definitely have their place in consideration about editorial strategies.

The point I’m trying to make is quite simple really: instead of looking at the realm publishers function in as being predominantly digital, with print being at best a leftover from an increasingly anachronistic past, we should forget about the whole digital/analog divide for a moment and place publishing in the real world. Even if we have our hands full keeping up with the increasingly convoluted technology landscape, we should simply forget about the delivery aspects of what we produce, to focus on what the actual, real-world value is that we are trying to deliver to our customers.

Some of this is of course already happening: just see how important the events business has become for many publishers out there – to the point that in some cases, it accounts for 80% of revenue. A similar shift can be observed in the music business where sales from CDs have fallen dramatically, but revenue from concerts and other music-related sales and services is on the rise.

But we need to push this approach much further: while it has become a truism that in the digital realm, experimentation is essential, the same approach should be used in the real world. The key to a successful business is perceived value – for publishers this means that the center of attention should shift from a mechanistic analysis of information delivery to a value-based approach, that drives far more daring experimentation than what is seen today.

In the second part of this article I will look more closely how publishers can try to put these ideas into practice. Stay tuned…

After 10 years at the helm of a leading European technology magazine, Andreas Pfeiffer founded Pfeiffer Consulting in 1998, with the aim to provide market-specific research and consulting to media producers and technology providers. Through his site, Pfeiffer Report, he offers in-depth analysis of emerging media, publishing and technology trends.

Pfeiffer is a frequent speaker at international events for the publishing and media community, and his insights have been quoted in newspapers and magazines such as The New York Times, the International Herald Tribune and Wired.” @pfeifferreport