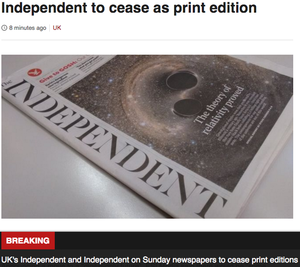 Independent’s owner Evgeny Lebedev announced the switch to a digital-only future for the daily Independent and Independent on Sunday on Friday. At the same time he confirmed the sale of the innovative, low cover price “i”  to Johnston Press.

Lebedev said readers were pointing to a digital-only future.

Media commentator, Roy Greenslade, writing in the Guardian, put a positive spin on the news, saying Lebedev would be able to claim the switch as another first for the Independent.

“It was the first UK national paper to switch format from broadsheet to compact. And it was the first to grow a spin-off sister title, the i, and – in so doing – create a publication able to attract a £25m price tag.

“If Lebedev achieves those terms in his negotiations with Johnston Press he will be able to invest in an online news outlet that has been gradually growing an audience for the past couple of years.”

But George Brock, Professor of Journalism at City University London, said packaging it as a positive move would be artificial. “Abandoning print and going online, for The Independent, is an act of desperation, and not anything else,” he told the World Editors Forum today.