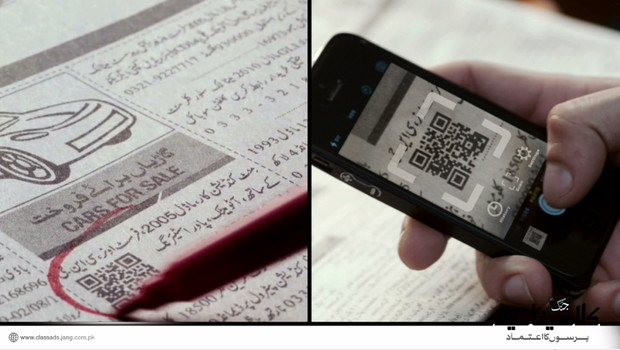 The Jang, which claims a 50-percent share of readership in the country and a 70-percent share of the classifieds market, introduced the codes in the automotive and property sectors in ads in the Sunday paper in February this year.

Jang classified advertisers request the QR feature at the time of booking. They receive a unique code via SMS on the mobile number they used to register the classified ad. They use the code to log on to the Jang QR classified website, where they can upload photos and videos related to their advertisement.

Readers can use any QR reader app on their smartphones to scan the code and see pictures and videos of the automobile and property that is being advertised.

“This helps readers not only see what is on offer, but it helps them in their shortlisting process. The sellers can stand out from other advertisements by giving more information to potential buyers,” said Sarmad Ali, Group Managing Director Marketing, Jang Group of Newspapers.

Advertisers pay a premium of Rs. 250 (slightly more than 2 Euros) for each QR code. Ali said, “Advertisers can choose either to upload a video clip or pictures. In the case of video, they can upload one video of up to 20 MB. If they opt for pictures, they can upload up to eight pictures totaling 20 MB.”

He said, “The uploaded content is carefully reviewed before publishing.” There are four criteria against which each ad is scrutinized. An ad can be rejected for any of the following reasons:

Regarding pre-launch field testing of the system, he said, “The system was put to test for over a month before launching. Over 1,000 ads were created and tested rigorously. Test users from different regions, using different devices, at different times of the day tested the system by booking ads, uploading data, pictures and videos, and practicing the actual load of users and viewers.

“We are using a high-speed dedicated hosting server having 10 TB of bandwidth, which could support 1,000 concurrent users, viewing 100 QR ads each of size 15 MB, browsing from mobile phones, tablets and PCs from different countries around the world – all at the same time. We keep an eye on the number of concurrent users at peak hours and will improve the hosting server’s configuration whenever needed,” he said.

Ali said the newspaper has seen “a surge of approximately 300 percent in the number of QR ads posted from the first week of launch.” He added, “It’s too early to bank on economic benefits, since the campaign is recent and still live, but so far the results are positive.”

He continued, “It is important to remember that an advertisement in Jang classifieds is safer and more credible than free online advertisements. Jang values the trust of its readers and advertisers. Therefore, national ID card information is required before any ad is placed. This ensures that the ads are credible and genuine. As the ads are also paid for, you can also rest assured that the advertiser is genuine and is invested in selling,” said Ali.

“Jang has long been the leader and most trusted classified source for customers for decades. With this major new innovation and development, Jang has clearly shown it is the classified leader and is going to stay there for a long time to come,” he said.