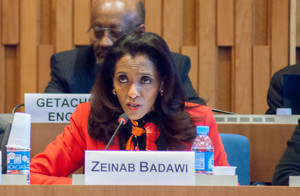 Badawi suggested bringing together all layers of responsibility under one umbrella organisation: “It would seem that there is consensus that it would be UNESCO that could perhaps take the lead at the international level to try to see if the world community can really be galvanized behind this issue.”

Almost 300 participants attended the UNESCO meeting, including a diverse range of media organisations, editors and journalists, all seeking ways to stand up for the safety of media professionals and to discuss ways to fight for justice for those killed on the job.

“I think UNESCO really have done an extremely good job in bringing together so many of the relevant actors and stakeholders on this issue of safety for journalists because there are many dimensions to the problem,” said Badawi, who moderated a session on ending impunity.

One of the speakers, Cilla Benkö, Director General of Sveriges Radio, shared the story of Nils Horner, a very experienced British-Swedish reporter who was shot while doing his job in the relatively secure, diplomatic district of Kabul, Afghanistan on 11 March 2014. Almost two years later, and with the Swedish government’s support in the investigation, there is still no clarity as to who was behind the unprecedented execution-style attack.

“If we really want a well-functioning democracy, we need journalists to be able to do their jobs without the risk of being kidnapped or shot in the street,” said Benkö, pointing out the importance of covering these killings: “If nobody says anything about it, nothing will happen.”

Besides journalists themselves, media organisations, be they private or state employers, print or broadcast, have a crucial role in ensuring the safety of their journalists, said Badawi. “If it is jeopardized in any way, they need to make sure that any agent responsible doesn’t get away with it.”

And there is also the role of government, state authorities, and yet another layer, the international framework to set up guidelines around which there can be international agreement or consensus to ensure that we have a proper framework that governs how journalist safety can be ‘guaranteed’.

“Complete safety cannot be guaranteed, but what you can do is minimize the risks for journalists operating in hostile environments or situations of conflict,” she added.