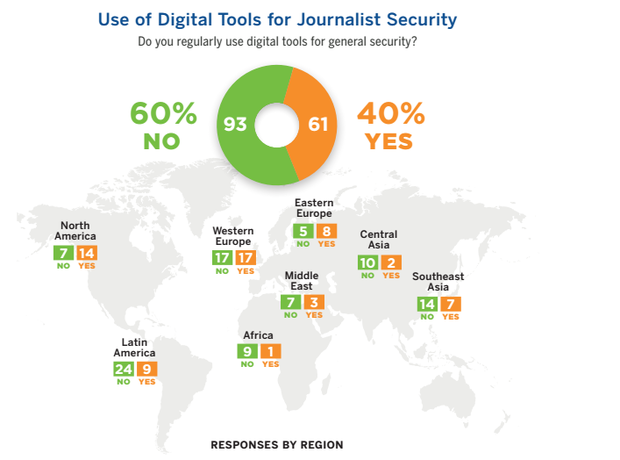 An online survey that measured journalists’ use of technology, found a general lack of awareness about the power of digital tools to enhance security.

Commissioned by the Center for International Media Assistance (CIMA) in Washington, the report was conducted by Javier Garza Ramos, a journalist based in Northern Mexico, and the World Editor’s Forum special advisor on safety, who is currently developing a program on media development and press freedom in Latin America.

The survey had 154 respondent from across the world. Only one in five of them reported encrypting their devices; just 30% said using secure online communication, file sharing and storing; and as little as 15 respondents use digital tools for geo-tracking in hostile environments, despite the urgent need for digital and physical safety. There were some misconceptions about the safety of tools, such as Google Drive, or Dropbox, WhatsApp, who aren’t actually safe at all.

The report also confirms that the dangers journalists face globally vary greatly. North America and Europe have a higher level of awareness for protecting online communications, resulting from a “growing need for tools to avoid surveillance”. Latin America, Africa and Asia are more focused on physical security.

To encourage usage of these available digital tools, the report suggests sharing experiences among journalists, and training the newsrooms. Developers of may benefit from reporters’ input to adapt tools to the specific needs of journalists.

The full report can be downloaded here.